Hey there! How is your week unfolding so far? My photo shoot was re-scheduled for last night, which was SO fun! We shot on Acorn street and all around Beacon Hill and the Esplanade. More on it later 🙂 Before I get into the workout, I have to vent about what happened on Monday night. If you remember, I was supposed to sub a class at the Wellington BSC on Monday night at 5:30. The class was supposed to be BodyPump, but no BodyPump instructors were available to teach, so the permanent instructor got special approval for a format change so that I could teach the class. I had a great supersets workout all planned out, with only minimal cardio since the class is not used to cardio and I was so excited to finally get to sub at that gym (it’s huge, new, awesome and 5 mins from my apartment).

Well, I got there and had my bench and bar and weights all set up, and I was starting to talk to a few members about the slight format change and then all of a sudden, this lady comes running into the room, still in flip-flops and throws her sneakers on MY bench and runs to the stereo going “few I have 1 minute to spare!”. Clearly, I am very confused and I tried to explain it quietly to her, but she was a very vocal, overly expressionate (I don’t think that’s a word, but I am making it up because it fits well) person who felt the need to make the whole thing a bigger deal than necessary. To make a long story short, she was claiming that she was supposed to sub a 5:30 spin class for Nicole. News flash, lady, there is no 5:30 spin class at this gym on Monday’s and Nicole teaches at Central on Monday’s. Anyway, this lady tells the whole class that she has been teaching for “a million years” and asks then asks them if they wanted Pump or “whatever she is going to teach” (pointing at me). Obviously it made more sense for her to teach the real format of the class, but what bothered me is that she just came in and took it from me! And then kept bringing it up all class and was totally inappropriate (throwing her bar down, picking out and picking on the new people, calling light weights “baby” weights, etc.). ANYWAY. Vent over. Instructors- have you ever experienced something like this? Class goers- have you ever had an instructor like this?!

Ok. Let’s get to the workout. I want to do a recap of the discussion from last week’s post on Compound vs. Isolation Exercises, but I haven’t had a chance to spend time put something together… it will come, though! It’s almost ironic that I am posting today’s workout since I just got over telling you how I am loving isolation exercises more than compound exercises at the moment. What can I say? When I can only pick a few exercises to do in a class, I want them to include as many muscle groups as possible! This workout surely did that. 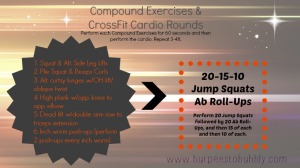 Most of this workout is fairly self-explanatory, but if you have questions, obviously ask in the comments or shoot me an email! Ab Roll-Ups might be new to you as they were new to me… Thank you, Women’s Health 🙂 Here’s the explanation and picture for the move: Ab Roll-Up. This is a super tough move for your legs, as it’s so much harder to go from seated to standing, but only using your legs, than you’d think! Make sure you’re not rolling too far on your back so that you’re crunching the back of your neck; only roll to about your shoulder blades/meaty part of your upper back. These ended up taking much longer than I had anticipated, so for the 2nd round, they did just 12 and 6 of each and the last round was just 6 of each.

I ended the class with low and high mountain climbers (4 high knees, then drop down and do 4 mountain climbers. Again, thank you Women’s Health) for 2 minutes and more ab work.  I liked this workout because it included so many different things and my legs literally felt like jello by the end!

Questions for you: What is your biggest pet peeve about instructors (I won’t be offended!!)? Do you like it when they try to make funny jokes when they aren’t funny? What’s your most favorite “new move” as of late?