Disclaimer: I was provided some free classes in exchange for this post. As always, these are my honest thoughts and opinions on the studio I’m reviewing.

Last week I had the opportunity to check out a new Boston indoor cycling studio, Cyc Fitness, which is located at 50 Park Plaza inside the David Barton gym. The gym itself is really easy to locate AND they validate your parking ticket at a near by garage so you only have to pay $7, which is a steal in Boston. I was able to bring my sister with me and we had no problem getting to the gym and checked in. Since Cyc is inside the David Barton gym, you have access to their locker room, which was beautiful and fully equipped with everything you’d need to get ready for the day or night after your workout. Checking out nice locker rooms is such a treat since the Y and BSC aren’t known for having fancy, well equipped ones 😉

We got to the class in plenty of time to change our shoes and get set up on the bike. The room is set up in a horseshoe-like shape and it seemed as though it was really big. I was happy that our class was mostly full since I think it makes the class better when you can feed off of everyone’s energy. The bikes were pretty standard bikes, but we both mentioned how we loved the shoes- maybe it’s because they were brand new and therefore more cushiony? Who knows, but I’ll take it! Another difference was the weights. Unlike using a bar at Flywheel or small hand weights at Recycle, B/Spoke, etc., we used small sand bags which was kind of cool. With all the indoor cycling studios in Boston I’m happy when studios try and do something that sets them apart from all the others.

Our instructor, JB, seemed a little nervous at first (found out later that she’s a very new instructor) and with multiple “yipping” and “yooing’s” right off the bat, I’ll admit I was a bit skeptical of how the class would go, but I’m happy to say she settled into her groove and the class was really great. We did a lot of sprints and some hill climbs but what I liked the best was the amount we used the weights and incorporated arms into the workout. When I workout I really like to get a full body workout, which is why I was never big on spinning. Ever since indoor cycling became popular, I’ve been a huge fan since there is usually one or two songs dedicated to “arms”. Sometimes they are hard, sometimes they are not, and while I wasn’t particularly challenged by the arms in the class I went to, I loved that we did so much with them. I felt like I was working harder than normal because of the fact they were full body tracks, not just mindlessly peddling and burning out your shoulders. We were doing legs, core and arms all at once- talk about a big bang for your buck!

I think my favorite part of the whole class, though, were the kickboxing combos we did! I told my sister after that those combos were the one part of the class that I totally nailed 😉 We did jabs and hooks and upper-cuts and blocks- a dream come true for this cardio kickboxing lover! Changing it up and doing something so different than anything I’ve done in other classes was really fun and kept me entertained. There was another time where she had us standing/sitting in waves, too, again something I’ve never done in a class before.

I’m not sure if it’s standard Cyc choreography or if it was JB own touch of flair, but I was  a big fan of all the “new to me” moves and formats throughout the class. I’m really excited to go back and check out some of the other instructors (or, rather, “cycologists”, as they call themselves) because I’ve heard from other bloggers that there are some “must try” instructors.

Details on the studio: 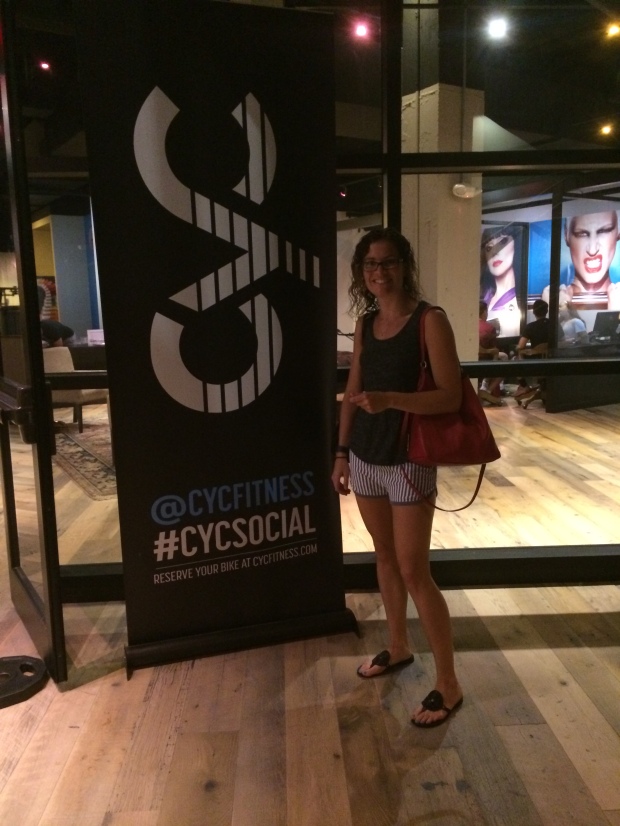 Questions for you: What is your favorite indoor cycling studio in Boston? Have you been to any good classes lately?