Hello! How’s your week going so far? Normally on Monday mornings I try to wake up and go for a run before I start work so that my lunch break and after work can be spent for meal prep and blogging, however, that doesn’t always happen so sometimes I end up doing it on my lunch break or after work. In other words, Mondays are usually my running days, but with the darker and cooler mornings, getting up and out the door for a run before work is not as easy as it was over the summer when it was super sunny and warm 😉

That’s where this workout came from, though, so I’ll chalk that up as a win! I had all intentions of running last Monday morning since I had lunch break and after work plans, but it was still pretty dark and chilly and I wasn’t in the mood to try and find where I put my colder weather running gear so I decided to do something in the apartment. I threw this workout together quickly, but was pleased with how it turned out! I was actually a little sore the next day and was super sweaty after I finished. 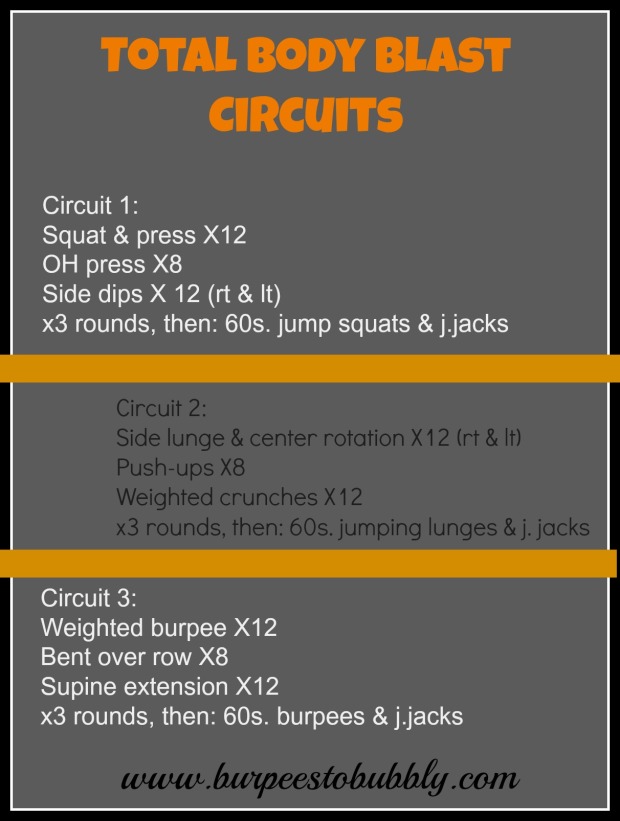 The way it works, is each set has a combo (lower & upper body) move, upper body move, core move and cardio blast. If you’re short on time, you could pick a few sets instead of doing all of them. All of the non-cardio exercises should be repeated for a total of 3 times before throwing in the 2minute cardio blast.

Most of these exercises are pretty common on B2B, but if you have questions on any of them don’t hesitate to ask me in the comments!

Questions for you: Do you still run in the dark and cold weather? Do you have equipment at home so that you don’t have to go to the gym?