Wow. What a fun weekend we had on Nantucket to celebrate Sheila! I had never been to Nantucket, so that made me even more excited for the weekend. We had originally gone back and forth on a few different ideas for the weekend, but I think everyone was very happy with ultimate outcome. Sheila found a great little house/cottage through Air B&B (I think? maybe it was Home Away?) which ended up being a super affordable option since a hotel and eating out at restaurants for every meal would’ve been really expensive! Big thanks to Amy and Jessi for all the planning and getting the food/booze/decorations.

Friday morning, I got up and actually did my hair and put on my new dress- you know it’s a special occasion when I put time into how I look 😉

I met up with Jessi and Lauren at the ferry terminal and we decided to kill some time by having cocktails- it’s never too early for a mimosa 😉 or wine on the ferry, for that matter! 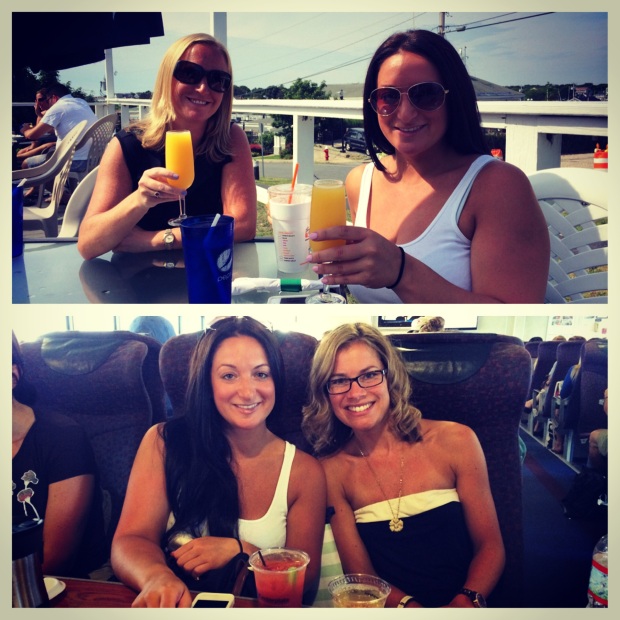 Once we docked in Nantucket, we headed to The Gazebo to meet up with a few friends who were already on the island. Apparently The Gazebo is famous for their mudslides so although I’m not generally a fan of those types of drinks, I had to try it. The verdict? I felt like I was drinking a grown up milk shake!

After our drink, we headed back to the house where Amy, Nikia and Amanda had decorated it for Sheila’s arrival- it looked so good! 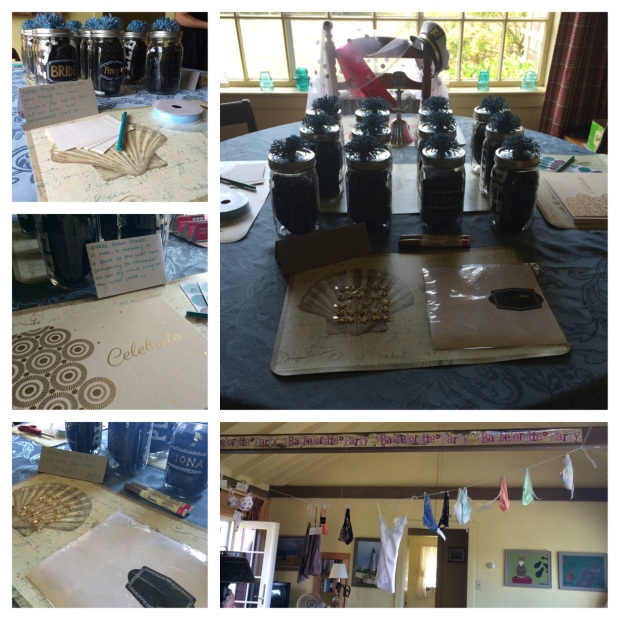 They also stocked up the fridge and freezer with lots and LOTS of food and drinks. We laughed all weekend that we are clearly getting old if we only went through a quarter of a handle of vodka all weekend… we are definitely getting old.

Once everyone was at the house, we popped some bubbly (obvi!), made a quick stop at the beach, had some snacks outside and grilled up a delicious dinner of chicken, steak, corn on the cob and rice. When we finished dinner, we played some games (Heads up! Have you played it? SO FUN!) and walked to the Chicken Box for some live band and dancing action. 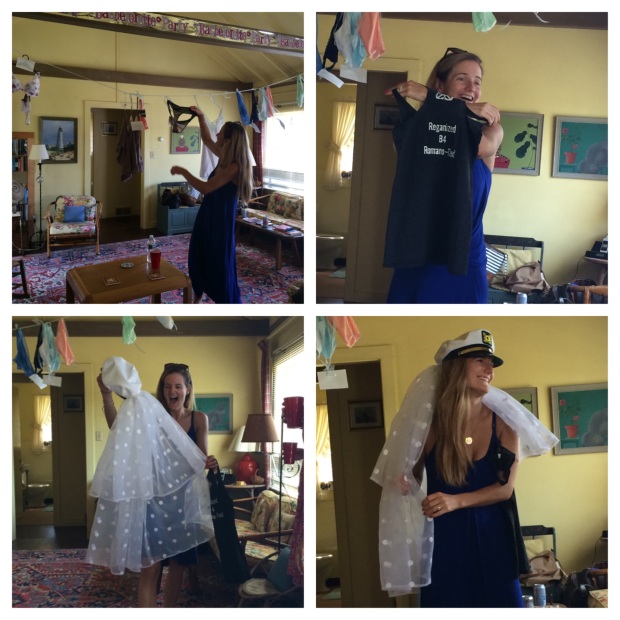 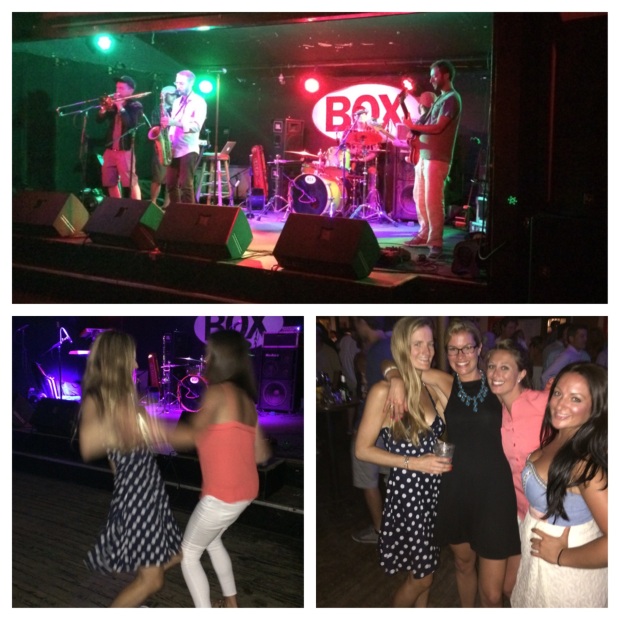 Since we all took it easy and got home around midnight, we all felt pretty good on Saturday… good enough for a bootcamp workout– my favorite!

The rest of the day on Saturday was spent at the beach (with packed lunches and drinks!)- I can’t remember the last time I PLAYED in the water like we did that day- so so fun!

We cleaned up in the afternoon and made our way to Cisco Brewers, which was probably one of my most favorite parts of the weekend. We were all decked out in our bachelorette getup and enjoy the delicious beers, interesting vodka drinks and even some wine! I loved that they had an outdoor band and so much area to hang around outside- it was the perfect way to spend the afternoon! 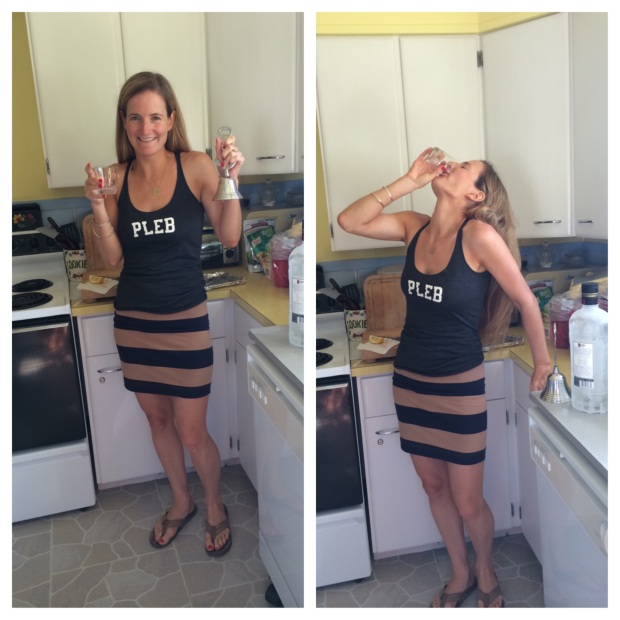 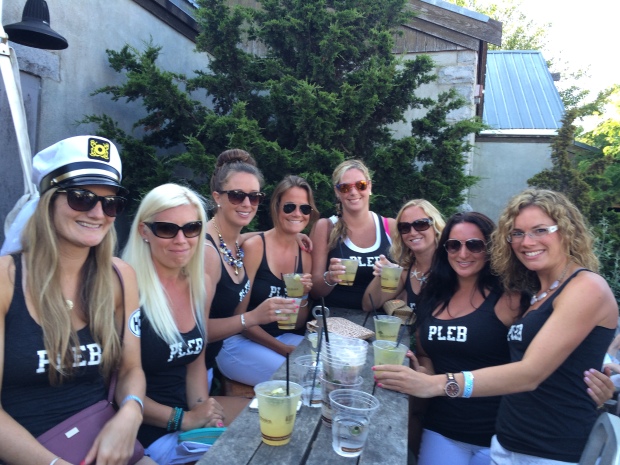 Once the brewery started to slow down, we headed back to the house and Kia, Jessi and I got busy in the kitchen making homemade chicken parmesan… #butfirstletmetakeaselfie 😉

We decided that Saturday night would be a real “night out”… and, we meant it! We even stayed until closing- something I haven’t done in a REALLY long time. We went to Nixs since we met the band at the brewery and they told us we “had to come”. I have to say, I’m pretty excited we met them because they were really good and we all had such a blast. Obviously my friend Kia and I were the first to start the dance party… some things never change 😉

Sunday morning was a little bit of a slower start than Saturday, but after a big breakfast of bacon, eggs, fruit, yogurt and English muffins, we all perked up and got ready for the beach. I had to head back on Sunday because I couldn’t take more time off at work… whomp whomp. The rest of the girls stayed until Monday or Tuesday and based on the pics I saw, it looks like they kept going strong throughout the remainder of the weekend- I was impressed!

Phew! If you made it this far- thank you!! All in all, it was just an absolutely awesome weekend- everyone was in good spirits and we all just had a blast being together. I am so blessed to have such wonderful friends!!