Weekends go by fast enough when you have the whole one, right? Well, getting one cut short makes them seem even shorter 😦 Even though my weekend was cut short, I feel as though I was able to do a lot of fun stuff during the time I did have!

Friday night, I went to Douzo Sushi in the Back Bay. I had never been there before, but I was pleasantly surprised by both the atmosphere and the service/food. We sat right at the sushi counter which was fun because we got to watch the sushi chefs do their magic. I had a glass of Cava to start… nothing like bubbly to kick of the weekend! 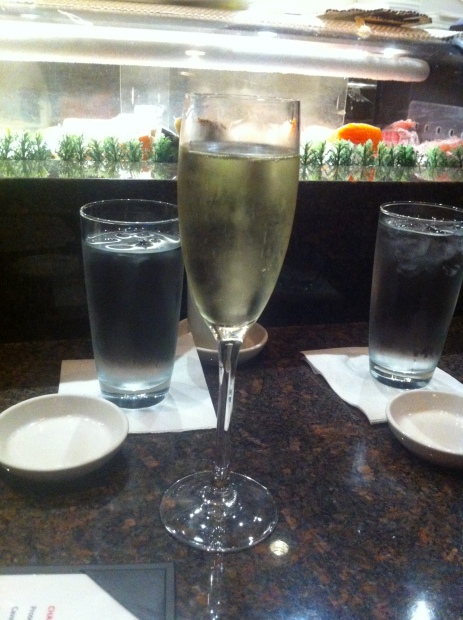 We got the garlic-spice edamame (holy crap SO SO good. I want to try and recreate this at some point), a few signature rolls and some sashimi pieces. Yum! 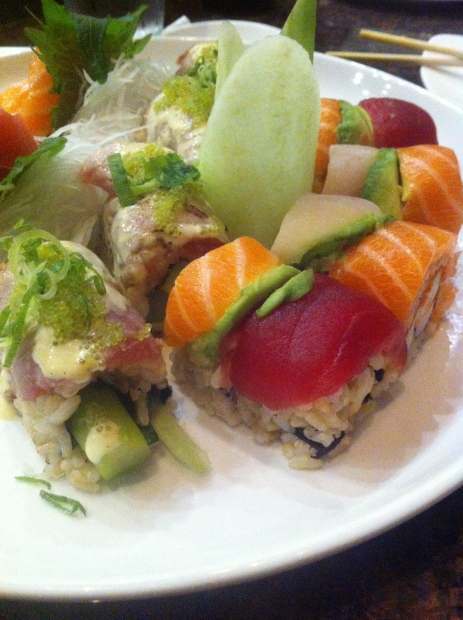 Saturday started with a workout and then some shopping, which was really just a reason to exchange a pair of shoes. There was a Chipotle in the mall so I treated myself to a chicken burrito bowl for lunch. Delish!

My friend Nikia and her boyfriend, Kyle, had a Harvest Party at their gorgeous home in New Hampshire, so I headed north on Saturday afternoon to attend. It was only about an hour trip- love that. No surprise that Kia had the place beautifully decorated! 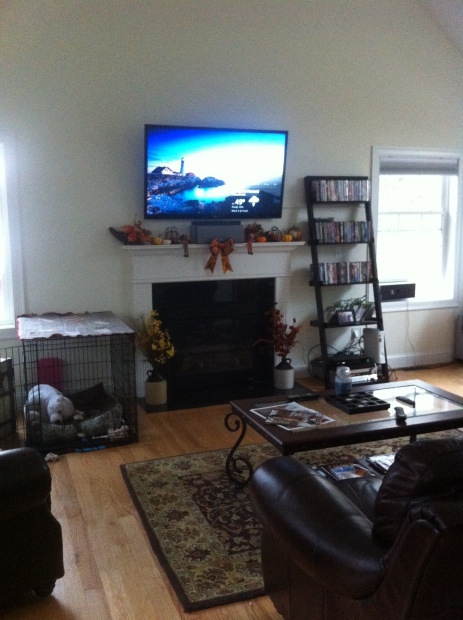 I was driving back home to Boston that same night, so I had a few glasses of bubbly at the start and then switched to water.

They had games set up outside and I had forgotten how fun it was to play corn hole, beruit, etc. Steve and I (well, mostly me… apparently I’m good at corn hole?!) killed it at corn hole! 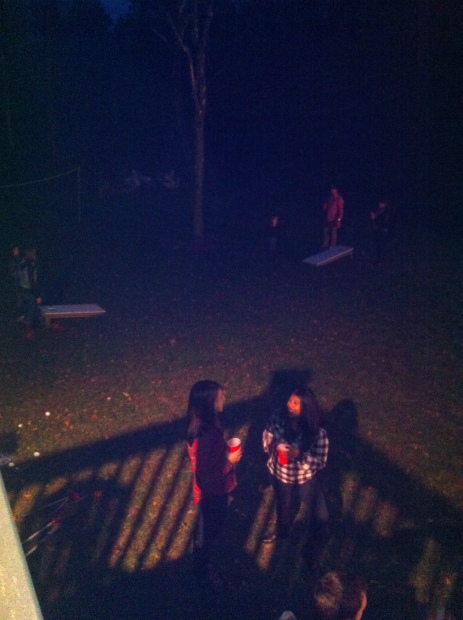 Per usual, Nikia had an amazing spread of food. 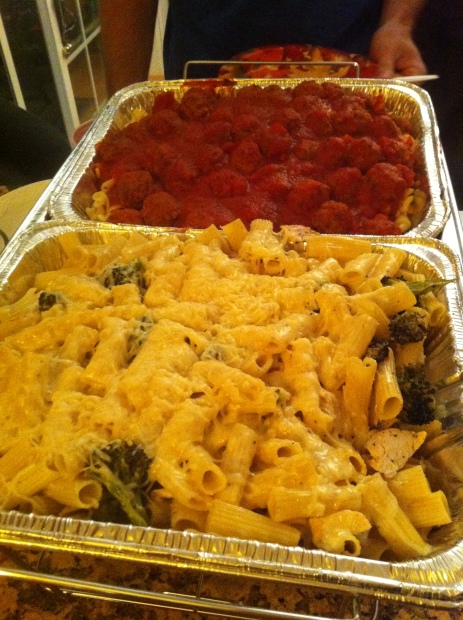 Thanks for a fun party, Kia!

I made it back to Boston in no time at all and ended up watching the Sox game… I don’t watch sports, so I am glad I picked Saturday’s game 6 game to watch.

Sunday morning was spent blogging, catching up on some TV shows, filming something fun for an upcoming post and getting ready for an afternoon of travel. I love that most airports have Wi-Fi because it allows me to get work done.

I hope you’re having a good week so far, I’m hoping to be back tomorrow with a really fun Wednesday Workout post.

Questions for you: Do you like sushi? What is your favorite sushi restaurant? Favorite drinking game?

I had my housewarming party this past weekend and boy was it fun! There was a great crowd (I think about 20+ people throughout the afternoon), tasty food, lots of wine and festive decorations. Although it’s always a little stressful planning and hosting a party, I really do love it. I wish I could do it more often, but that would be a very costly habit.

After work on Friday I headed to Market Basket to get things for the party. While I was there, I did my weekly grocery shopping so I didn’t have to do it on Sunday. Since MB was not busy at all (shocker- it’s always busy), it was a great choice. I also went to Kappy’s to get some wine and beer. Even though people were bringing their own, I wanted to have some at the start of the party. 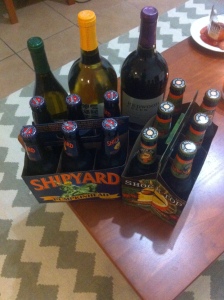 I decided I wanted to make Turkey Chili, so I based my recipe loosely off of this recipe, but I added ground turkey into the mix, too. It came out delicious and was a big hit!

I also made some Pumpkin Pecan bars on Friday night and a mini pizza for myself. It was a very busy night!

Saturday was a little crazy in that I had to head to Brighton to teach from 10-11. It was ok, though- I love starting my day with a good sweat and after that I was amped and ready to get my apartment into party mode. 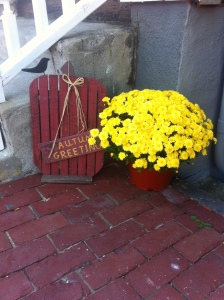 I also went with a country/cowgirl theme, per my friends’ request!

So fun! Not long after everything was ready, people started to show up. Everyone was so sweet and brought me awesome gifts, which I wasn’t expecting at all! 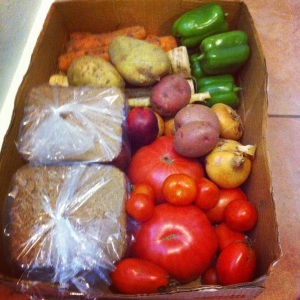 Beautiful candle and decorative napkins (that match my color theme!), awesome knives and the best cutting board everrrrr (seriously, how often do you drop half of the veggies you’ve cut up when you’re trying to transfer them from the board to the pan. this will eliminate that!), 50 Shades of Grey game (so fun!), lots of wine, a gift card, a beautiful Orchid and the fantastic veggies and bread from my dad. I felt so spoiled! Thank you to everyone for bringing me such nice things!

I’ll let my pictures do the rest of the talking, but I will say that it was a great party. I had home friends and family, school friends, gym friends, neighbors (other people living in my building)… a great mix of people! The weather was perfect and we were able to hang out on the patio for a good portion of the day. 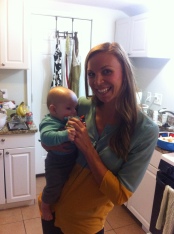 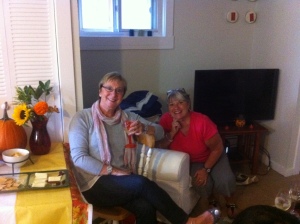 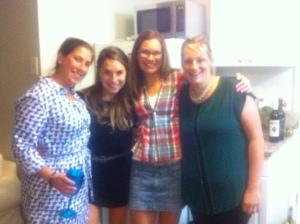 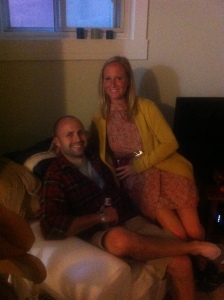 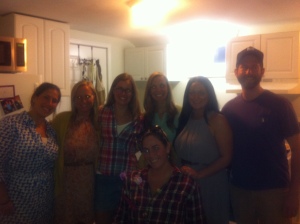 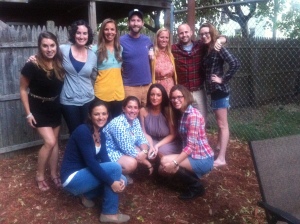 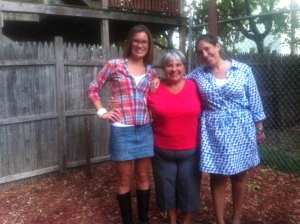 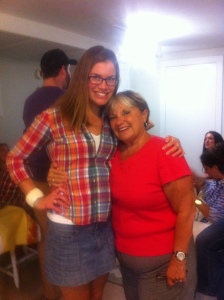 I am so blessed to have so many wonderful friends in my life! Thank you so much to everyone who came- wouldn’t have been the same without you!