Sorry I teased you yesterday with a photo of the delicious dinner I quickly threw together on Sunday night, but it was worth the wait- promise!

While we were driving back to MA, we brainstormed meals that wouldn’t take a long time to throw together and wouldn’t leave lots of leftovers since neither one of us were really around for dinners this week. Veggie stir fries are always a good idea for a quick and healthy dinner. I was craving a real teriyaki sauce, so I put that on my grocery list, as well as the other ingredients we needed. I had some chicken tender strips in the freezer that we thawed which saved on groceries!

If you’ve been reading my blog for a while, you know that I always cut up my own veggies, but I was so tired on Sunday night and knew I wouldn’t start cooking until 7 so I decided to take the easy route and buy a bag of frozen veggies. They aren’t my favorite, but man did they save time! I also usually make my sauces, but again, I was lazy and tired and bought that, too. It was interesting to read the labels on the thousand different marinades out there. After comparing many different brands, I settled on La Choy- good decision on my part! I forgot to buy rice so I used a quinoa harvest blend that I had in my cabinet and it ended up being fine.

1. Cook the quinoa according to the directions on the back of the box. While that is cooking, toast your sesame seeds over medium heat until they brown up.

2. While the sesame seeds are toasting, cut up your chicken. When the seeds finish, move them to a small bowl and place the chicken in the pan. Cook chicken until it’s no longer pink. Remove from the pan and place in a bowl. 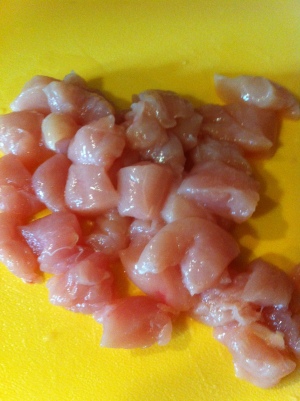 3. Place the veggies into the pan and cook until they have thawed and heated through. Add the teriyaki sauce and the chicken once the veggies are cooked. 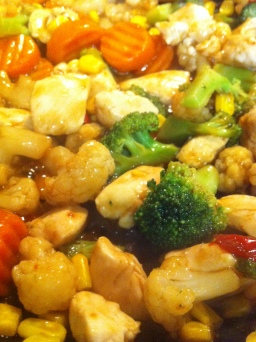 Once everything is warmed, place some quinoa at the bottom of the bowl, top with the teriyaki chicken and veggies and sprinkle some toasted sesame seeds on top. This whole meal, even with photography breaks, took about 30 minutes to cook, so it’s a perfect weeknight meal! 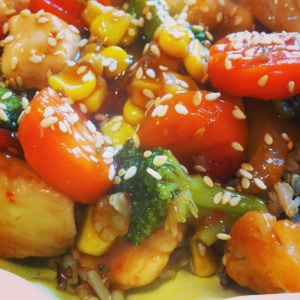 I think it would be even better served over udon noodles, but I clearly wasn’t thinking straight when I was at the grocery store. Next time!

Questions for you: How long do you like to take on meals during the week? Do you do most of your cooking on the weekends? What’s your favorite store-bought teriyaki sauce?