A few weeks ago, I spent the weekend on the Cape celebrating a fantastic friend. If you read my post about her Nantucket bachelorette weekend, I’m sure you won’t be surprised to hear that her wedding weekend was nothing short of amazing. Whenever my college girlfriends and I get together, it’s ALWAYS a good time, so when you throw a wedding in the mix for one of the most fun girls out of the group, it’s sure to carry on that torch. Not only was Sheila an absolutely beautiful bride, she thought of every single detail to make the day go off without a hitch.

Upon arriving on the Cape on Friday, we had lunch and then got to work putting together the flower arrangements. For all of you DIYers… props to you! Although it’s nice to know you did all of the details and decorations, it’s very time consuming both in the execution and planning. However, everything we helped Sheila with came out absolutely beautiful and her vision was perfect! 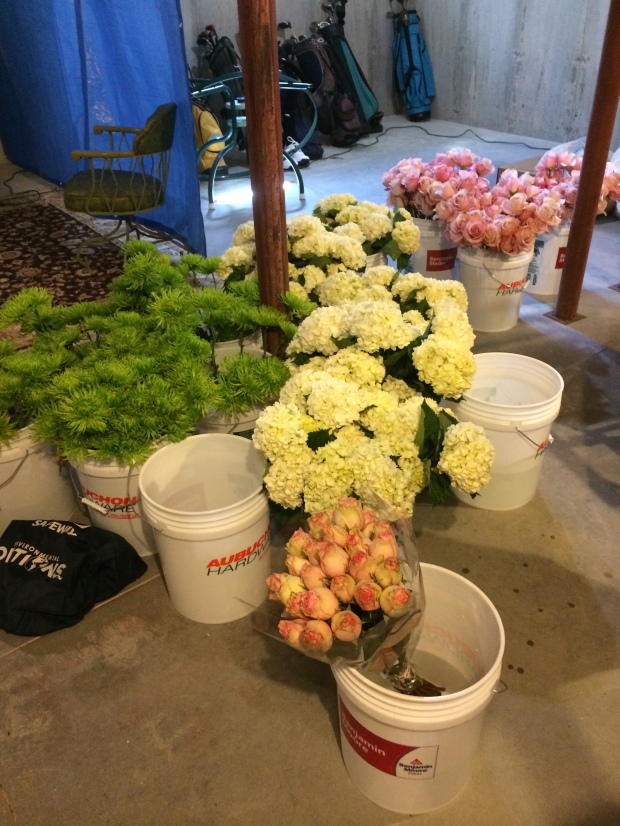 While they were at the rehearsal dinner, some of us had dinner at the house we rented. Our friend Amy is fantastic at finding houses and this one did not disappoint! it was .1 miles from Sheila’s house and had plenty of room to entertain.

Later that night, we headed to Shuckers for pre-wedding festivities. This bar was right on the water and with the temps and humidity very high, it was a perfect way to cool off. That, and huge goblets of wine also do the trick 😉

I woke up on Saturday morning bummed to a. feel the intense humidity and b. notice the tremendously overcast weather. I always feel sad when the weather isn’t perfect for outdoor weddings, but I assure you it didn’t rain on her parade (literally and figuratively). After a 4 mile run, Lauren and I headed to the church to set up the flowers. It looked absolutely beautiful and there is something just so peaceful about being in a church when no one is there.

We held a little cocktail/snack hour before the ceremony and before we knew it, it was time to head to the church. 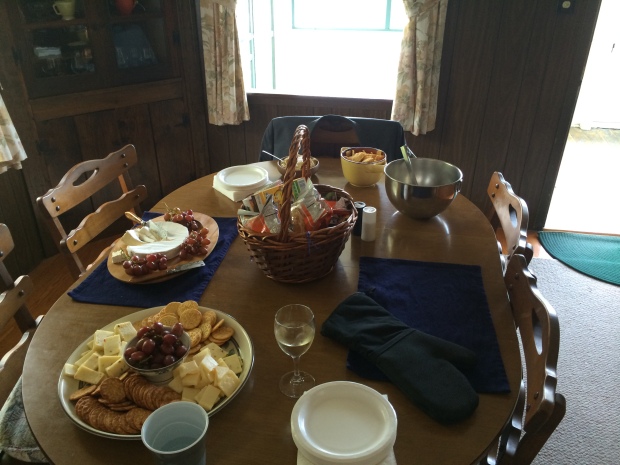 To say it was hot and humid both inside and outside of the church is and understatement, but you couldn’t tell by looking at Sheila. She was an absolutely stunning bride and the service was very heart-felt. On top of that, the church was adorable and quaint and just perfect for her beach-themed wedding. 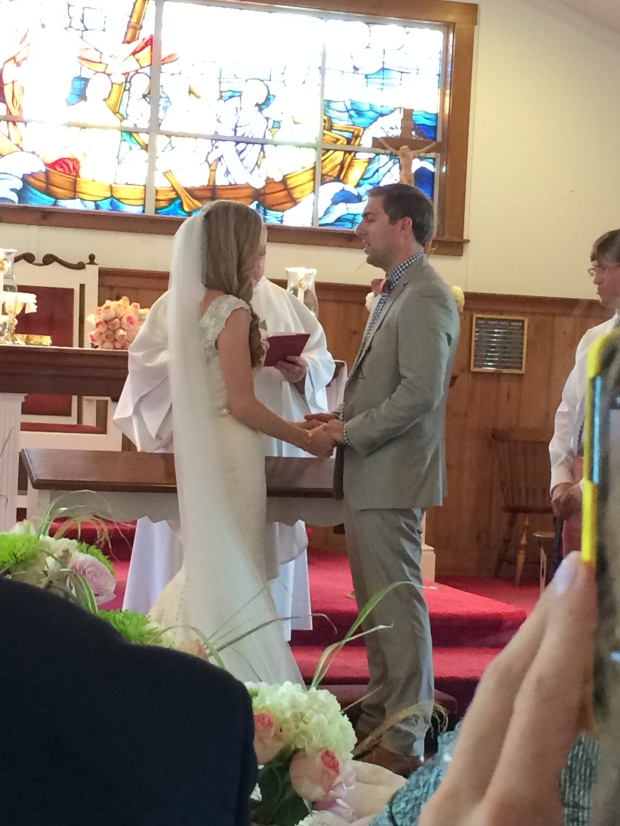 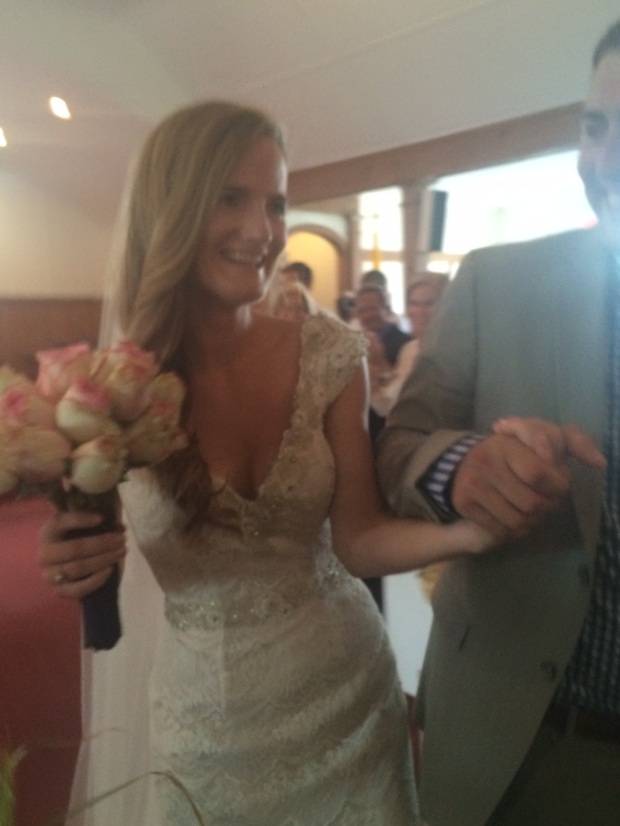 The reception was held at her parent’s Inn (Seashell Inn, if you’re wondering) which has a great yard area that was perfect for the wedding tent. 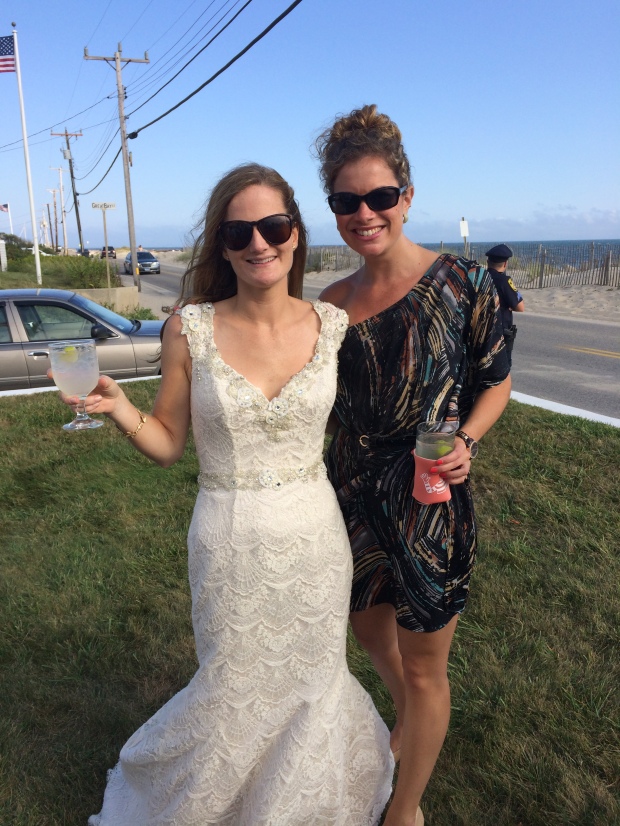 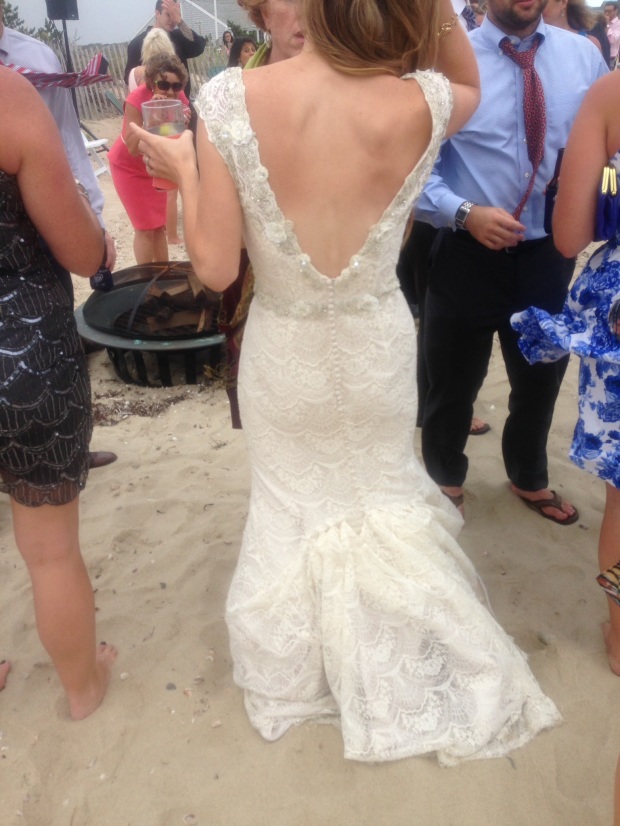 Not only that, but it has private beach access across the street! Cocktail hour on the beach? #dontmindifido 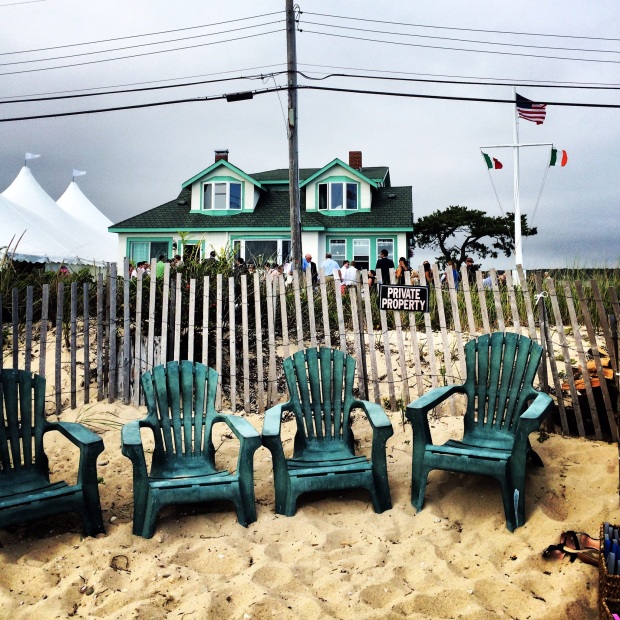 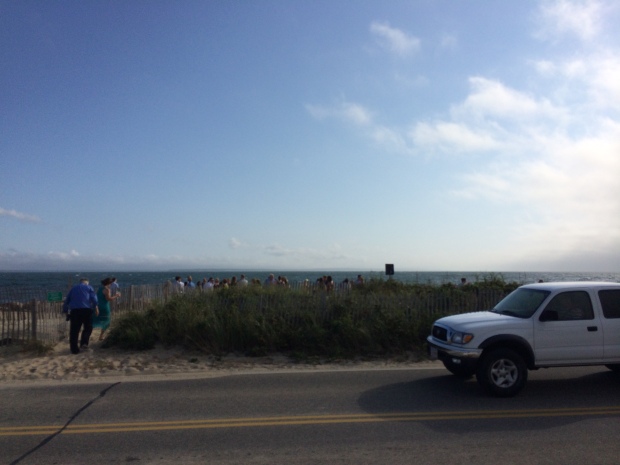 We had a blast drinking and chatting and taking pictures on the beach. The sun came out for a bit and even though it went back away, the rain held off the entire night! Sheila had flipflops at the beach for all of us to wear since heels are not sand-conducive. 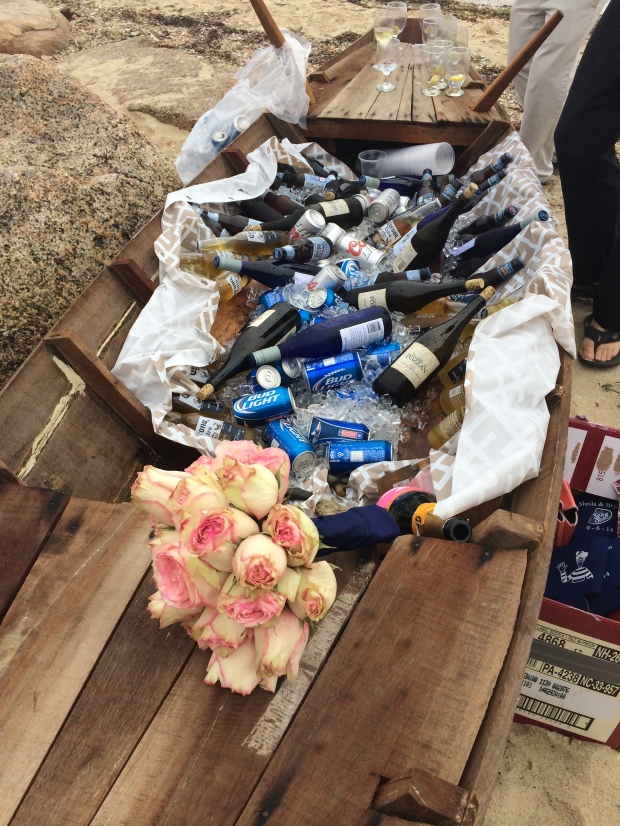 The passed apps were out of this world amazing. Seriously- the best I’ve ever had! I had oysters, steak with a gorgonzola cream sauce, a cranberry goat cheese thing, lamb and quinoa meatballs served on cucumbers, coconut shrimp, shrimp and kilbasa kabobs… and there were so many other things that I didn’t even get to try! By the time dinner came around, it’s no surprise that none of us were that hungry 😉 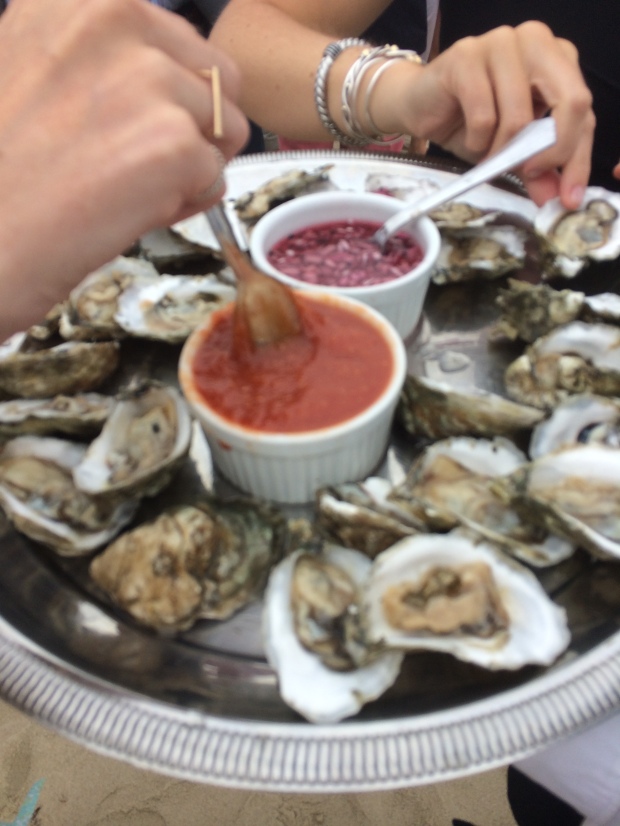 We were ushered into the tent around 6pm for the dinner portion of the night. The tent, tables and decorations were beautiful!

Dinner was just as delicious as the appetizers. It was the most organized, delicious buffet food I’ve ever had at a wedding. The main entrees were salmon, wrapped in sole with a scallop in a lobster butter sauce (ummm hello, delicious) and steak. Both were absolutely incredible. Best wedding food I’ve ever had! 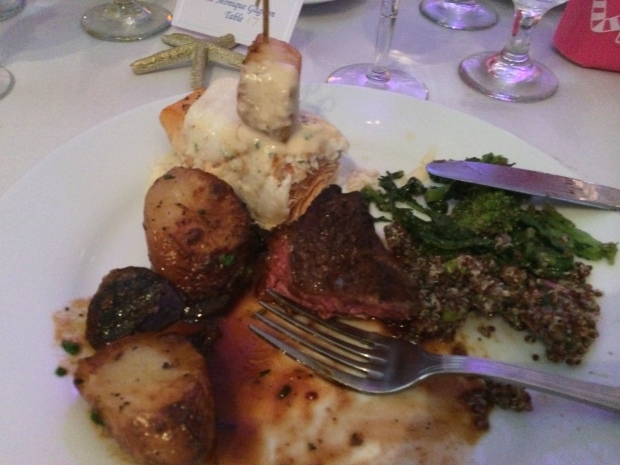 It was so nice watching Sheila and her dad dance, and I think he had everyone in attendance shedding tears during his speech. It was so thoughtful and funny and sweet- Sheila will definitely always be his little girl.

Sheila’s brothers stood in as her “Men of Honor” which is probably the cutest thing I’ve ever seen! Her oldest brother kept fixing her dress throughout the ceremony and their speech was not only hilarious, but also very loving! I love watching the relationship between brothers and sisters. 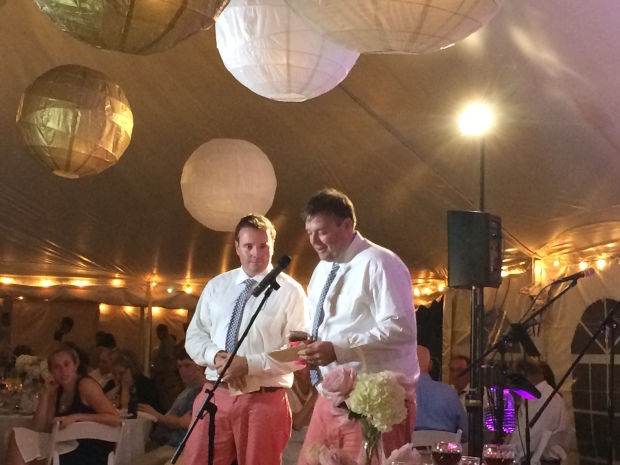 Sheila surprised Bryan with a very, special guest appearance. She had Rene Rancourt come to their wedding to sing the National Anthem!! It was seriously the best surprise ever!

(Press play, then pause, then play again and it won’t be skewed. Not sure what’s going on with my Vimeo videos!) 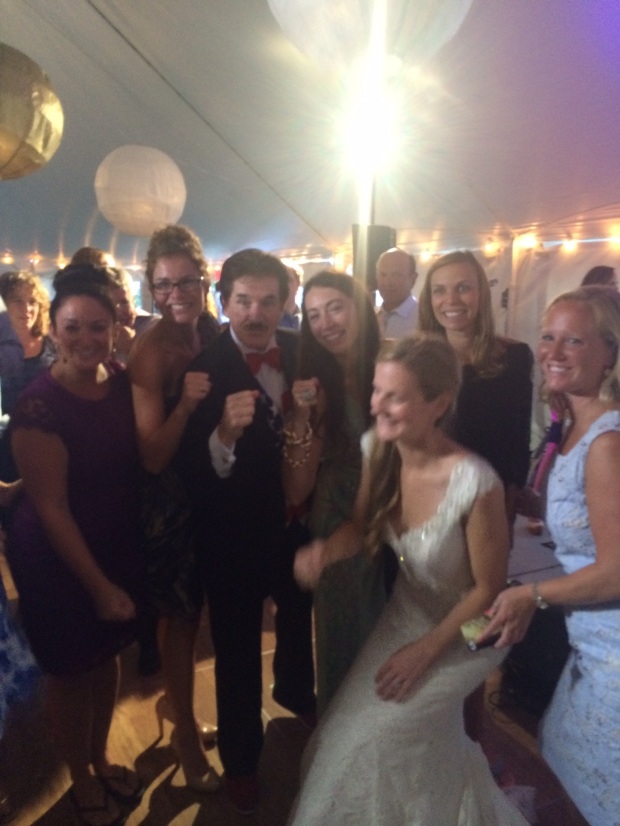 The rest of the night was spent dancing, laughing, drinking, and more dancing. The band was phenomenal and played all the best songs to dance to. Here’s a glimpse into what that looked like 😉 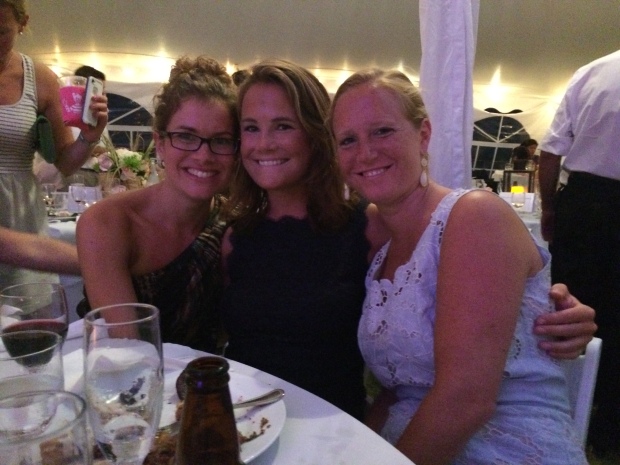 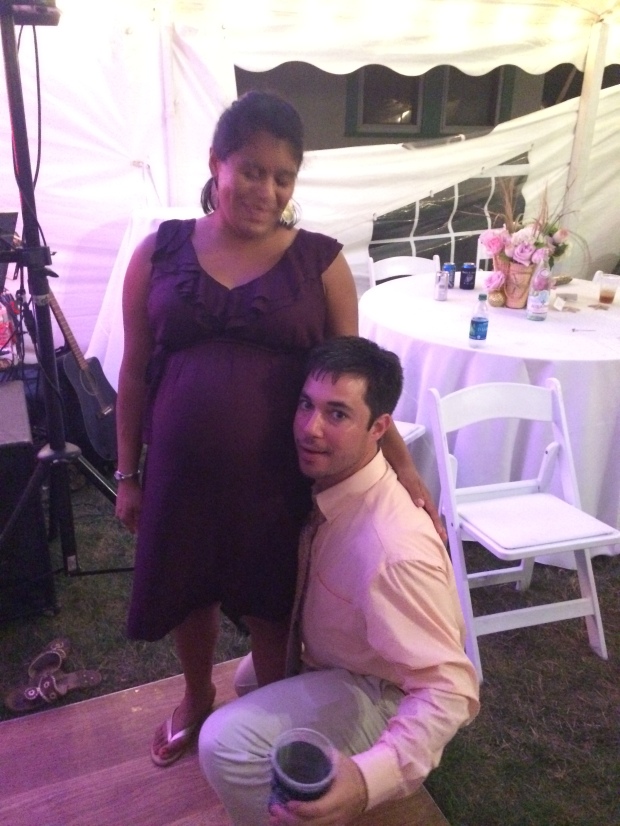 Once the band was done for the night, we all ventured back over to their private beach and went skinny dipping (haven’t done that in YEARS!!!) and then chatted and hung out around the fire.

Sunday morning, we all gathered at a local waterfront restaurant for a wonderful goodbye brunch. It was exactly what all of us needed 😉 Catching up with the girls after nights like that is one of my favorite things to do! I’m so blessed to have such a wonderful group of girlfriends.

The weekend was such an incredible time. Sheila and her mom’s hard work, time and energy going into planning and executing the wedding did not go unnoticed- all of it was perfect! And I know I’m not alone when I say this: Sheila, can you and Bryan get re-married every year?? Cheers to a wonderful lifetime of happiness, laughter and love!