Hi there! Remember how I talked about getting out of my comfort zone a few weeks ago when I went to Foster Fitness? It wasn’t comfortable. In fact, it made me feel quite uncomfortable. The gym and working out is usually a place and time where I feel comfortable, but I realized that’s only because I tend to stick to the same things: teaching, running, UXF area, KB’s, TRX, etc. Take me out of my “comfort zone” area? I felt humbled, and, well,  “new” to working out. While it was hard, it was also exciting because it ignited a spark that hadn’t been ignited for a while; Fitness instructors get in ruts, too!

You see, I’ve gotten SO comfortable with the gyms I frequent, exercises I do and classes I teach that I had almost forgotten what it was like to be “new”. I wasn’t used to not knowing exactly how to brace my body for the exercises and heavier weights, I had to take multiple breaks on the last set, and I had to make multiple self-corrections throughout the various exercises. But, I didn’t let that get me down. In fact, I’ve visited the heavier weights section at the gym since that one on one session and have done barbell back squats, front squats and deadlifts multiple times now… on my own! I’m getting comfortable being uncomfortable.

And you know what? It’s not so bad!

I’ve been back to Foster Fitness for group ex classes two times now (maybe a third after work today) and I have to admit, I was faced with that same “uncomfortable” feeling. Most of her members have been going to her religiously since she opened her studio, so to say they all knew her and each other very well is an understatement. On top of that, they were familiar with the particular class, what weights they should use to execute the moves in a challenging, but safe, way and where everything was. And, they were SO STRONG!  In other words, I felt like a total newbie/outsider. But, I tried to put those feelings aside and do my best in the class. I asked questions and followed the lead of the other members.

And you know what? It wasn’t so bad!

After the initial uncomfortableness went away, I was able to focus on my workout and not about being the newbie. I realized that while my strength isn’t with the barbell- yet!-,  I was able to fly through the second half of the workout which relied more on speed and lighter weights. I even did 150 consecutive jump ropes…. on very tired legs! So, even though I experienced discomfort with certain parts of the workout and experience, I left there feeling proud of myself for powering through the hard stuff and for crushing part of the workout. 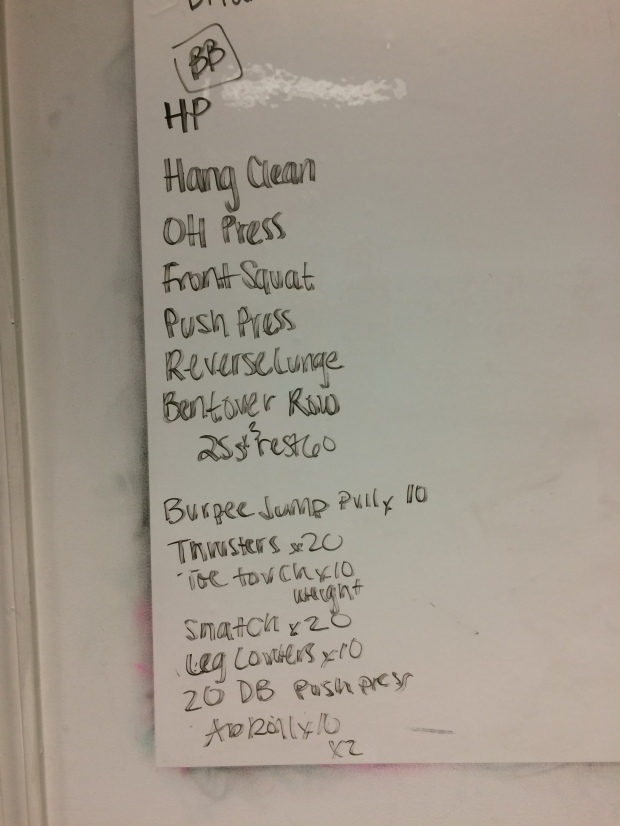 Here’s the thing, though, I could’ve easily let the first part of class and feeling like a “newbie” get me down and discourage me from going back, but I decided to get comfortable being uncomfortable and go back for a second class. While I still felt new, challenged and uncomfortable at times, I felt more confident than I had the two previous times I worked out there.

When we are in the midst of discomfort, I think it’s easy to feel like it’s never going to get easier. We like consistency,  comfort and feeling like we know what’s going on and what to expect. We don’t like  feeling uncomfortable, but the thing is- that’s where the change happens. It means we are doing something new and different and the natural result of that is change and growth, which is pretty awesome. Like the old saying goes, if we keep doing the same thing we can only expect the same results, so even though it’s hard to get out of our comfort zone, it’s so important to give it a try. I promise, although it’s hard and maybe a little scary in the beginning, it WILL get easier and better the more you practice and stick with it. And once you feel comfortable, you’ll know it’s time to change it up and get uncomfortable again- it’s a lovely little cycle 😉

Questions for you: Have you ever felt like you needed a spark with something in your life? What changes did you make to ignite the spark? What’s the last scary thing you’ve tried at the gym or with a workout?

8 thoughts on “Get Comfortable Being Uncomfortable”