Hi, hi! I hope you all had a nice long weekend! Although mine was fairly busy, it was really fun. Plus, there’s something about being home in Maine that just makes me feel relaxed, even if we are on the go a lot!

Since I had to teach on Saturday morning, I was around on Friday night and able to go out with Athena and her friends and gym friends for her birthday! Athena decided she wanted to go to The Asgard, which is a really fun bar in Cambridge. I had been once, but it was years ago, so I was excited to go back. I wasn’t necessarily excited about making the trek in from East Boston using public transportation, but I’m trying to save money where I can, so I did it! And, in all honesty, door to door was only about 40 minutes, which wasn’t that bad. It was nice to get to hang out with the YMCA gym ladies and also really nice to meet Athena’s friends in person, versus online (Slesh! I’m talking about you! haha) 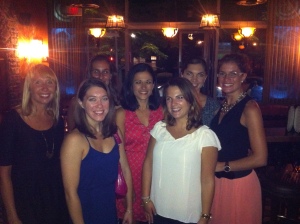 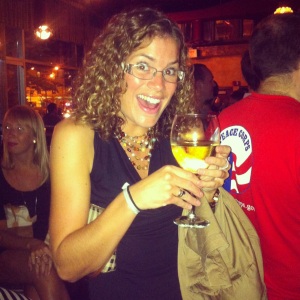 I only had 2 drinks while at the bar, but when I woke up on Saturday morning, I felt like I had had much more. I blame the goblet! Regardless, it was fun getting out and meeting new people and celebrating Athena’s birthday!

After teaching on Saturday, Danielle, Chuck and I headed north. I was dreading lots of traffic on the trip home, but once we got onto 95N, it was smooth sailing and we were home in the normal amount of time. As soon as we walked into the house, we were greeted with LOTS of canning. I got dad a pressure canner and he and my mom have been canning their fresh garden veggies like crazy! 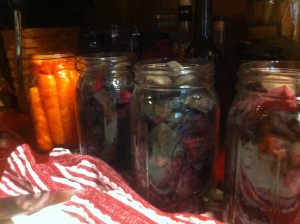 I think it’s so cool that they are canning all of the veggies they grew so that they can enjoy them throughout the winter months!

For dinner, we made pizza’s on the grill- the best way to enjoy pizza in the summer if you ask me 🙂 It’s hilarious when we all get together in the kitchen; everyone wants to be RIGHT next to each other and everyone wants to run the show. It’s quite the site! Mom filled us up with wine and then we headed out to the barn to cook up the pizzas!

On a side note, check out the collection of empty wine boxes in the barn:

The pizza’s were SO GOOD! If you’ve never made pizza on the grill, I suggest doing it.

On Sunday, I went for a nice 3 mile run and then helped dad pull potatoes. Pulling potatoes is no joke. I was actually sore from it on Monday! 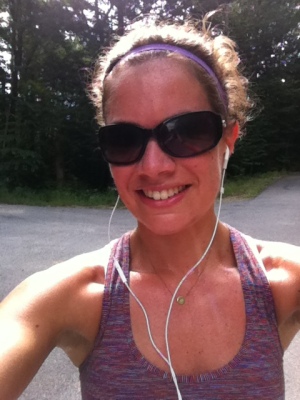 We headed out on Sara and Tim’s boat in the afternoon. I love snuggles with Zeke, but if he could stop growing I wouldn’t be mad. It’s crazy to see how much he has grown already! 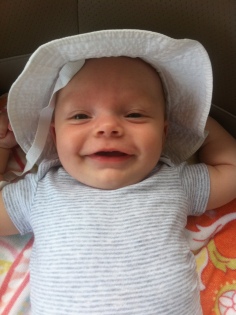 I also enjoyed a few Bud Light Limes (aka, BLL’s). I’m not a big Bud Light person, but there’s something about drinking BLL’s that screams summer! 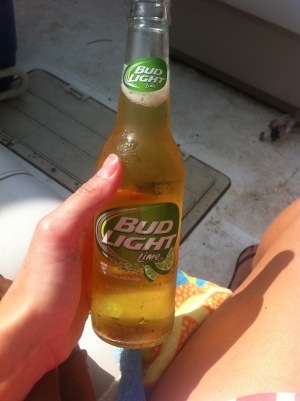 After the lake, we headed to the Mahoney’s pool for a BBQ. All I wanted all weekend was a REAL cheeseburger. Luckily, Colleen was manning the grill and cooked me up the best one! I didn’t take any pictures while were there, but the food was phenomenal (per usual). Mom’s peach-raspberry pie stole the show, though. Mom isn’t a big baker, but she nailed this pie recipe. It took serious self-restraint to not eat way more than 1 small piece. 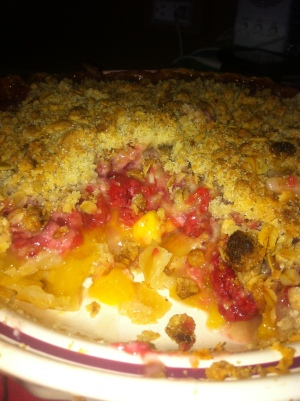 Would you guys be interested in me getting the recipe and sharing it? Aka, do I have an excuse to make this?? 😉

After the Mahoney’s, Danielle and I headed to my friend, Jason’s new house in Wells. We were seriously on the go on Sunday! We hung out with him and his HUGE (seriously, Maverick is REALLY BIG!) dog for a few drinks before calling it a night.

Monday I woke to crazy rain and thunder and lightning. It’s been a while since I’ve heard a storm that bad! Even though it would have been a good morning to snuggle up in bed, I got up and got in a good workout before heading to meet my friend Caitlin for coffee (iced tea for me- still haven’t had coffee since June!). Mom rewarded my workout with homemade waffles! Totally worth getting up to workout when you’re served waffles when you finish 🙂 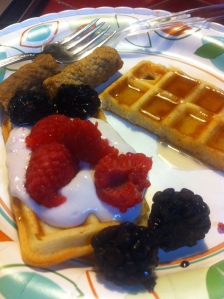 It was so nice meeting up with Caitlin and her little snuggle bug, Tucker. It’s amazing to see how much these babies have grown in just 3 short months!

And, that about sums it up! As always, a weekend in Maine was just what I needed to feel refreshed and relaxed. Even though we were on the go a lot (I also saw my friend Meredith for a short visit on Saturday), I’m happy I got to see everyone!

Questions for you: Did you go away for the long weekend? Do you have a hard time trying to fit it in to visit all your old friends when you go back to your hometown? What’s your favorite weekend breakfast?