Hey there! I find that when I’m around on the weekend with some extra time, I tend to spend it in the kitchen. I wouldn’t say that I’m a great cook or baker, but I love doing both and have turned out some pretty delicious meals and baked goods, so I think that’s enough to keep me happy and motivated to keep trying new things.

This past weekend, I had a blast baking festive treats and a Mexican dinner that was super quick and easy to put together. I think it’s probably the cooler fall weather that makes it so comforting to be in the kitchen with the stove going. Whatever it is, I’ll take it, because I love having fun treats in the apartment!

First up, Chocolate Chip Pumpkin Bread. Sunday morning I woke up and decided I wanted to bake pumpkin bread. I went online and did a quick Google search for “healthy pumpkin bread” and stumbled upon a bunch of delicious looking Cooking Light pumpkin bread recipes. I decided to try the Pecan-Topped Pumpkin Bread, substituting the pecans for chocolate chips. MMMM. A pumpkin bread smelling apartment is a great way to start the day;)

Next up, apple crisp. I told Jessi that I would bring apple crisp to her dinner party since I had a bunch of apples from Saturday’s apple picking. I found a great looking Martha Stewart apple crisp recipe and decided to use it! I can’t say I really like to peel apples, but, there was something very soothing and relaxing about peeling and chopping on Sunday, which made for a much more enjoyable process. Could’ve been the glass of wine I was drinking while I peeled and chopped 😉 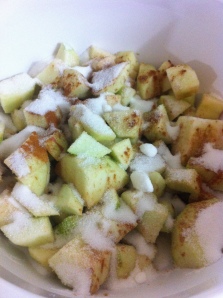 If I thought the smell of pumpkin bread was delicious, the smell of apple crisp was unbelievable! I absolutely love all apple desserts, but apple crisp is probably my favorite. I made a few different size dishes so I could keep some, and share more. 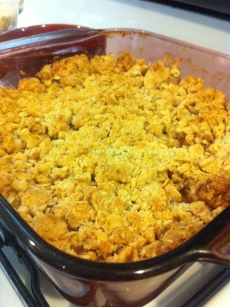 Lastly, I made a taco salad for dinner! I didn’t want to make anything big this week since I wouldn’t be around on Tuesday and Thursday through Sunday, so using up some frozen chicken and leftover veggies, adding in beans and taco seasoning was the perfect quick and easy dinner!

I had been craving Mexican for a while, so this totally hit the spot. The only thing missing was cheese. I bought Mexican cheese and everything… can’t believe I forgot to add it 😦 Oh well. Once I slathered everything in salsa I couldn’t even tell the difference 😉