I love Chicago. If I didn’t live in Boston, I would probably live there. I love that even though it’s a huge city, it still has that small city, Boston feel. I love that it’s clean and that there are so many fun things to do and good places to eat. This past trip was especially fun because not only did RM end up coming (my friend Lauren ended up not being able to go so RM took her place), but my best friend Jessi and her boyfriend and another couple were also there. RM had never been to Chicago so I was excited to show him around, and to also introduce him to my best friend, JP, who moved there a little over a year ago.

I’m going to try to keep my recap short and sweet, highlighting the places we ate and things we did and leave the rest to the pictures- Enjoy!

We got to Chicago around 10 and took the train to our hotel. We stayed at the W City Center, which I was excited about originally, but later regretted. It just wasn’t in the right part of the city where we ended up wanting to be the whole time, so it was a lotttt of walking each day! Next time, I’m going with my instinct and staying at the hotel my sister and I stayed at last time. Anyway! We grabbed a drink at the hotel bar before making the trek to The Purple Pig for lunch. 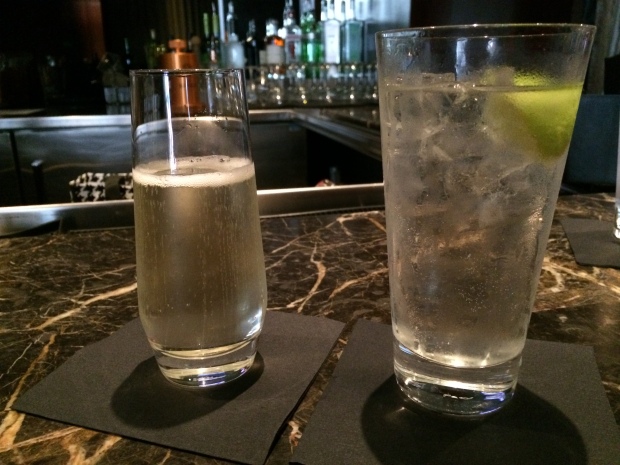 My friend JP couldn’t rave enough about The Purple Pig, and it did not disappoint! Our friends went on Thursday night at 6 and it was a 2 hour wait. Around 2pm on a Friday, we scored and found seats right at the bar. Everything about the place was awesome- service, atmosphere, wines and the food! A must if you go to Chicago.

We then went to the bean and took the necessary touristy pics! 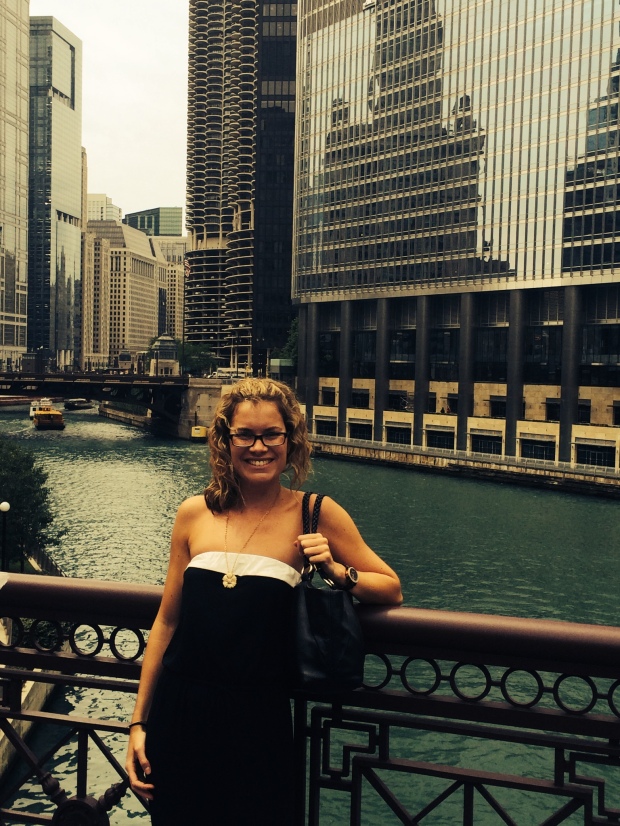 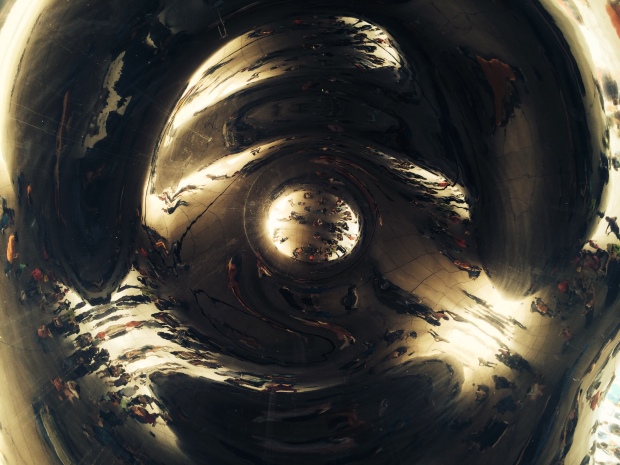 For dinner, we went to The Signature Room which is the restaurant at the top of the Hancock Tower. It’s the 95th floor, so the views were amazing!! The food and drinks did not disappoint, either. It was such a fun night. 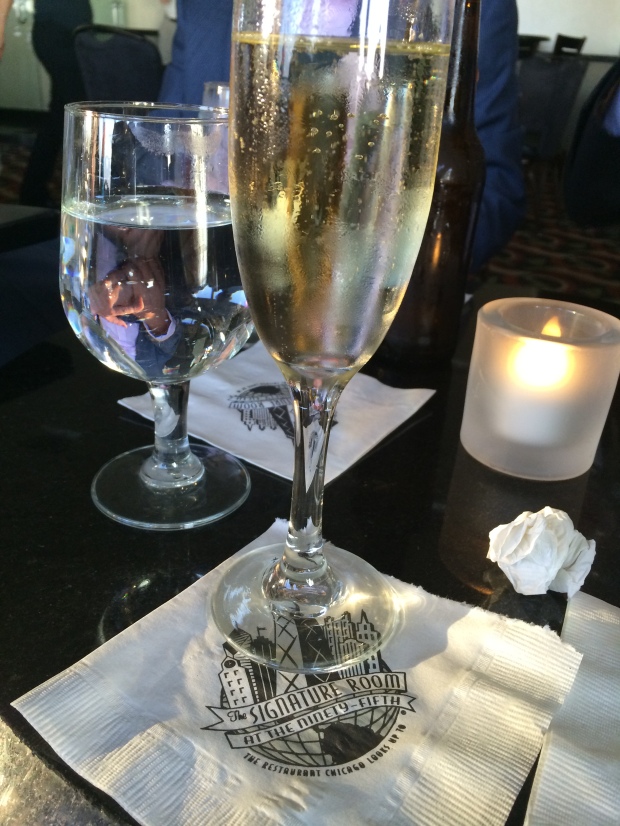 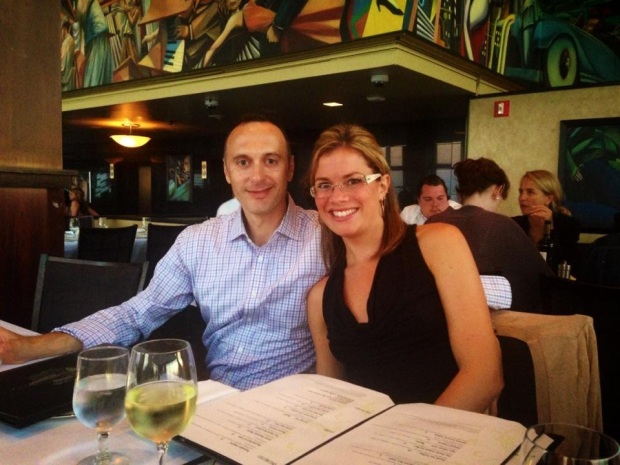 We grabbed a quick drink at Hub 51 after dinner before calling it a night.

After my run and a long walk with RM, we showered and headed to Lou Mitchell’s for breakfast. I highly suggest this place if you’re in the area- the warm donuts to start, the home-cooked meals on menu and the soft serve taster at the end had us rolling out of the restaurant!

The rest of the afternoon was spent at Wrigley Field, watching the Cubs get crushed by the Cardinals. I’m not a baseball fan and ended up getting bored not long into the afternoon, but it was still a really fun experience to go to a game there! 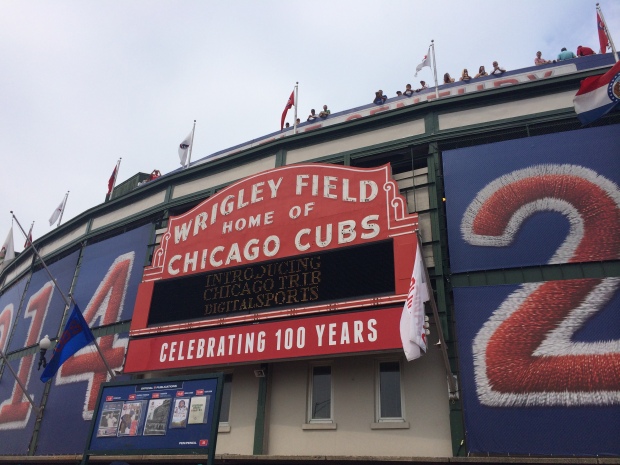 RM and I ended up grabbing a late dinner at Park Grill Chicago in Millennium Park before going to my friend JP’s apartment. I was really craving pizza and the one I ordered did NOT disappoint! Look at this thing!

We played Cards Against Humanity at JP’s, which is always a good time. It was SO GOOD to see him- I miss having him in Boston and working with him. womp 😦

I got up on Sunday and went for a long walk to get breakfast and Architecture Tour tickets. The weather was finally gorgeous, so I was really happy to be outside soaking it all up! RM loves architecture and real estate so he was in heaven throughout the tour. And, they serve drinks- how much better can you get?!

We grabbed a quick lunch at Sweetwater Tavern and Grille on our way back to the hotel.

RM treated us to massages, which was on the agenda for Sunday afternoon. Our hotel didn’t have a spa, but luckily the JW Marriott across the street had one. It was such a relaxing afternoon! We went in the hot tub and the steam room and sauna before our separate massages. Finished off with some champagne and you’ve got a very happy Monique!

Once we showered and got ready, we headed to the grassy field area at the amphitheater in Millennium Park near the bean. We grabbed some wine (they sell it everywhere which is awesome!) and had a blast chatting with Jessi and Chuck, people watching and watching the movie that was showing. I wish I did more of this stuff in Boston.

Dinner was at The Gage and it, again, did not disappoint! Everything we ate was awesome, including my cheese burger, which was so random but exactly what I wanted. It was the perfect day from start to finish! 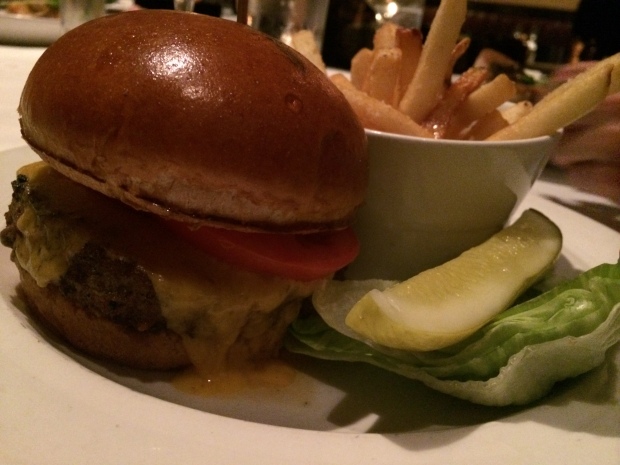 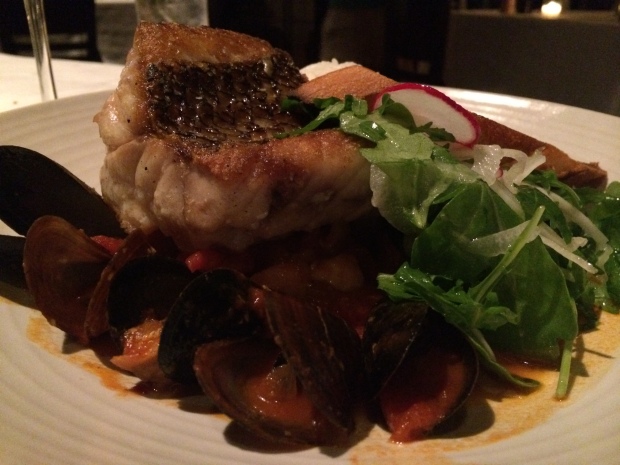 After our workouts, we headed back to Lou Mitchell’s for breakfast before shopping on the Magnificent Mile. It was a little chilly, but perfect weather for all the walking that we did!

Unfortunately, our flight home was delayed by a lot, which meant we spent a few hours at the bar and then I caught up on some blogging (before the free wifi timed out) and started a new book.

All in all, it was an awesome trip to Chicago! The weather could’ve been better, but other than that it was perfect. Also, if you’re looking for a way to save money, do this: Buy a bottle of wine and keep it on ice in your room. It’s so much cheaper than buying glasses of wine for $14 each!

And, it allows you to do this while getting ready 😉 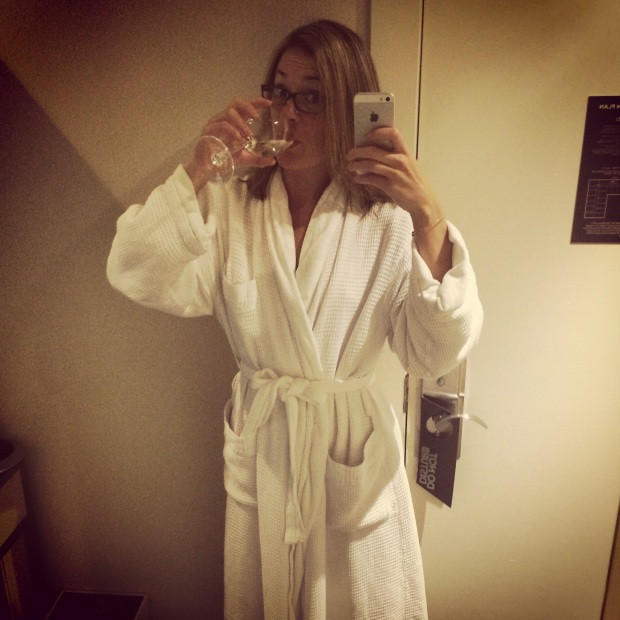 I can’t wait to go back- Chicago is a city that would never get old to me!

In case you missed my other Chicago recaps, here they are:

Questions for you: What’s your favorite part about Chicago (if you’ve been)? Do you ever have wine picnics? What’s the most recent ravel nightmare you’ve experienced?