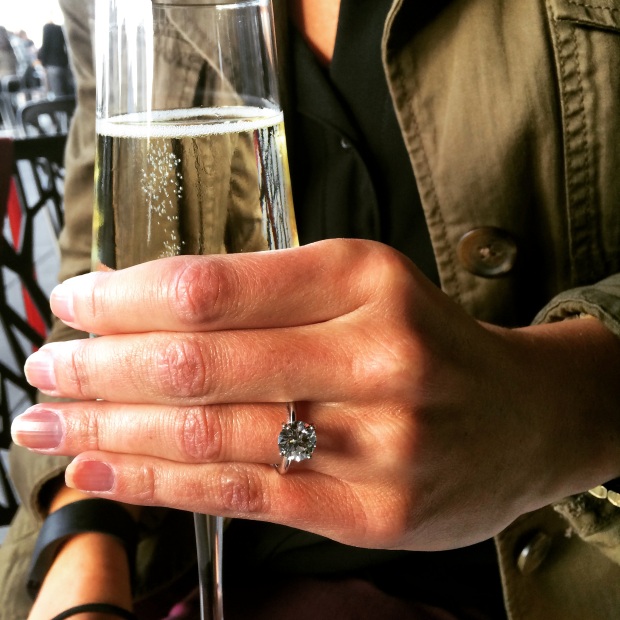 That’s right! On Saturday, RM made me the happiest girl alive when he asked me to marry him!

What started off as a normal Saturday consisting of teaching and getting my hair done, ended as one of the best days of my entire life! Let’s start from the beginning, though. All week we had made plans to go to KO Pies to celebrate our 2 year first date anniversary. The anniversary is actually this weekend, but RM will be away at a golf tournament so we decided to push it up to this past weekend. RM was actually the one to suggest the lunch time outing, which should’ve been the first hint that he had something other planned than just lunch 😉 Nonetheless, even with him continuously bringing up going to KO Pies on the weekend (which, he normally would have forgotten about after the first time it was mentioned since he doesn’t have a strong memory for plans like that 😉 ), I really never thought anything more than just an afternoon hanging out together. I actually joked as we were leaving the house that I couldn’t believe we were actually “on time” and that I got him away from renovations and other work around the house! After a beer, we decided to order some food: Arugula salad & the Braised Lamb Shank Australian Meat Pie- as a floater (with mashed potatoes, mushy peas and gravy). Everything tasted so good and it was an all around great afternoon.

We continued to hang out and have drinks- it was too beautiful not to, but after a while I started to get antsy and suggested we start making our next move. I really wanted 2 things: a cookie and to go to Assembly so we could do some shopping for the apartment. He had his typical “but Monique we are having such a good time here- good weather, conversations and drinks!”, but I had my head set and was ready to go so he helped me finish my drink and offered to get settle the tab. As he walked away, I reminded him about the cookie I wanted…

As he came back to the table, he had a funny smile on his face and was holding the cookie in one hand at his chest, almost like you’d hold open a book you were reading. I thought he was just making a joke and “presenting” the cookie to me… that is, until I looked down and saw the most beautiful, shiny ring on top of it. I think the first thing out of my mouth was “omg is this a joke?!”, because it was just so big and beautiful and I really thought he found a fake ring and wanted to play a joke on me. He continued smiling and laughed a little as he told me it was not a joke. I wish I could explain the type of smile and look on his face because as I think back to that moment, it just seemed like the happiest smile ever.

He then continued to say that he has absolutely loved the transitions we’ve made from landlord/tenant to boyfriend/girlfriend and that he wanted to make that next transition and asked what I thought about that and if I would like to marry him (and some other mushy stuff I’ll spare you with!). I didn’t respond for a little bit- not out of hesitation but because I was in such shock that I couldn’t speak! He asked again and I stupidly said “I do!” and realized that wasn’t the right thing to say and corrected myself by saying “yes, I will!”. And then we hugged and kissed and hugged some more until I finally put the ring ON. Oh, my, goodness. It is seriously the most beautiful ring and the exact one I’ve always dreamed of.

Even though KO Pies was extremely busy, the way the whole thing was executed was very private which I appreciated. I may love being in front of classes and teaching, but when it comes to engagements I like privacy. RM said he was getting nervous about how he was going to do the proposal since it was so busy and I kept letting people share our table, haha. Luckily, my need for a cookie worked in his favor 🙂

From there, we went into the city to get some bubbly for more celebrations! We went to the rooftop bar at the Envoy hotel. On the way, we made all of the obligatory “we are engaged” phone calls- to my parents and my sister first and then his family. My sister won for the most amazing reaction. We facetimed and she was crying and just SO excited. Omg I loved it!

After a drink, we decided to go back to our place and pop a bottle of Veuve that we had had in the fridge for a longgg time. 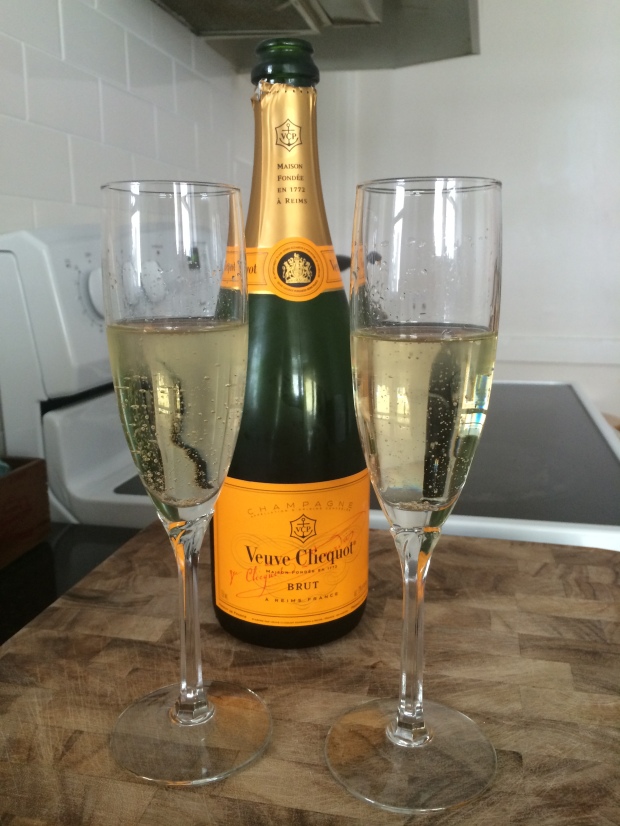 We grabbed a late dinner at Stellina which is right in Watertown Square. Everything was amazing!

I literally couldn’t sleep that night because I was so excited and couldn’t stop replaying the whole previous day in my head. I loved when RM finally woke up because he rolled over and asked how his fiancé was doing, which solidified the whole thing! We spent the morning having pancakes and hanging out before I went to get my nails done- totally necessary!

The weather was gorgeous so we went for a nice long walk along the water. We talked a little about the wedding and both decided we don’t want a long engagement or anything crazy fancy. We just want a simple wedding with our friends and family because that’s what matters the most (oh, and the bubbly and dancing!).

My sister and her boyfriend stopped by later that afternoon before we went to RM’s mom’s house and they brought us champagne and a balloon and a super nice card. They were the first ones we saw and talked about the engagement in person and it was so fun to reminisce and go through the details with them!

All in all, it was the most perfect day and proposal and I’m going to marry the perfect guy for me. I really feel so lucky and it has been such a fun couple of days. It’s so cute because RM is just as excited about it as I am- he is always asking to show me the ring and calling me his fiancé. Totally adorable. Thank you to everyone for all of your calls, texts and comments over the past couple of days. We feel so blessed to have the love and support of so many wonderful people in our lives.

15 thoughts on “The Journey Continues… {Spoiler: We are engaged!}”