Hi there! A little late for my MANIA review, but better late than never, right? Although I was only able to go one day this year, my one day was amazing. I was able to go to 4 different physical class sessions and 1 lecture. By the end, I was physically exhausted, mentally drowning (happily) in new information and super motivated to get out there and be a better instructor, not just for me, but for my members, their growth and their safety. There’s just something so invigorating about spending the day immersed amongst fitness professionals!

I wanted to share some of what I learned with you guys in case you were not able to attend the event or are looking for something new to try. Here’s the summary of the classes I took, as well as some take-aways. Enjoy!

Jump on it! for Chicks & Battle it Out! Ropes for Chicks

Ok, probably the coolest thing about MANIA this year was getting to take two classes with Chris Freytag. 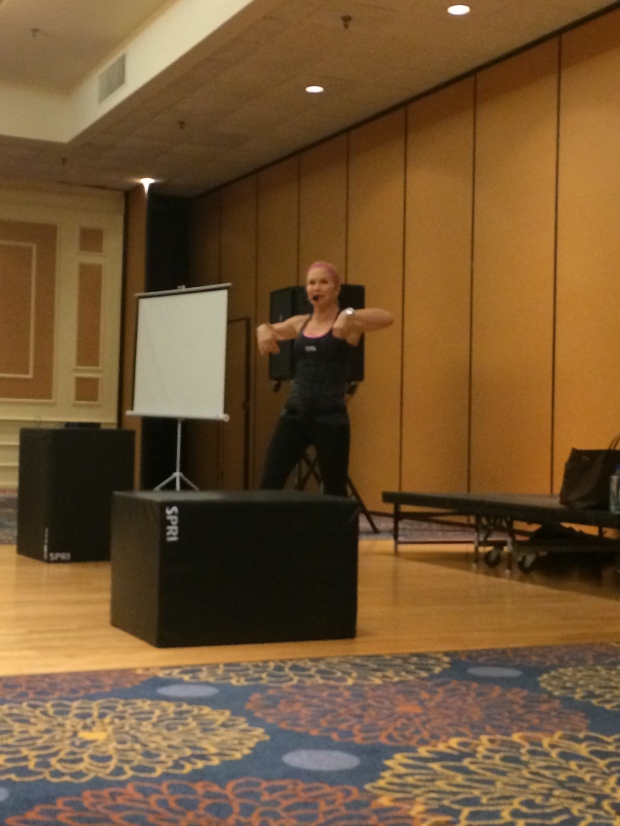 I remember doing her videos On Demand when I first moved to Boston, so meeting her & doing her workouts in person was so cool! What I loved the most about her classes was her emphasis on making the workout a team event. We worked the following connections:

Another thing I liked about her teaching/classes was the different ways you can run the class, again, keeping the team/coach aspect in mind.

The Jump on It class was fun as we used the SPRI boxes and did all sorts of workouts on them: step ups, plank jacks, decline push-ups, box jumps, elevated reverse lunges, etc. We worked for 30 seconds at a time. I was so sweaty and beat after this class- it was awesome! I think the most challenging class for me was the battle ropes class. The good thing was that the ropes were smaller than those huge ones they have at the gym that, lets face it, are just not meant for women. They are so thick it’s hard to even get a good grip! These were the perfect size and I learned so many new ways to use them- prone snake whips, squat walk with alternating waves, star jacks, isometric squat hold with arm circles, kneeling power slams, lateral shuffle with alternating waves, v-sit and whip, side plank with outside circles, burpee push-up… you get the idea. I can’t wait to do a workout like this on my own. I was SO SORE from this the next day- holy lats! 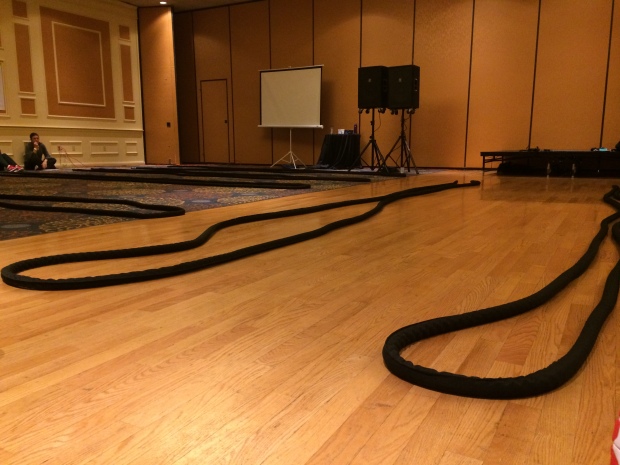 Chris Freytag was so encouraging and positive and made you feel like a star player. I was honored when she gave me the team leader award, and especially stoked when I realized my prize was a SPRI Step 360. This piece of equipment is amazing- so versatile an better for your form since it has a flat top. My workout for you tomorrow shows you all sorts of exercises you can do on it. 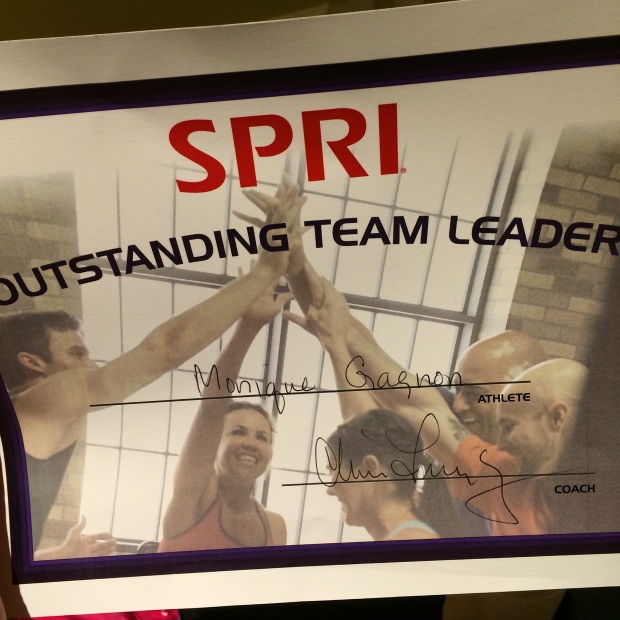 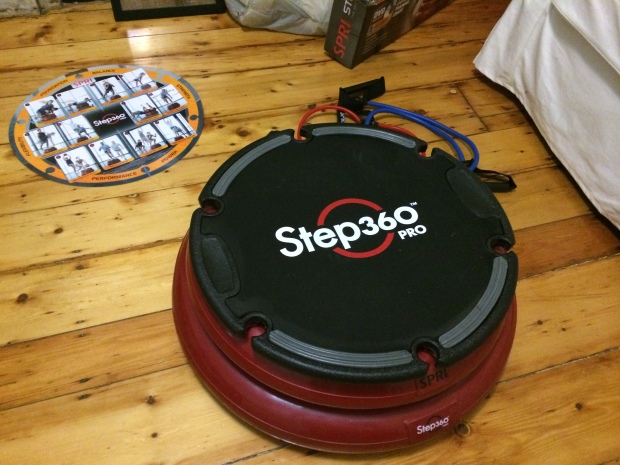 Another class I took was Kettlebell Training with Kelly Roberts. I’ll admit that KB’s generally intimidate me. I never know if I’m thrusting and moving and swinging correctly, so it was nice to break things down and learn how to do some basic moves. I never realized that KB’s had so many benefits:

I also liked learning about the different techniques:

We worked through all sorts of different moves in an hour long workout. The format was set up in a way where we did a grind move, a ballistic move and then a core movement. I learned some great moves and love that some of them can be used in my classes with dumbbells.

The last class that I took was Piloxing. I didn’t necessarily take the class to get new moves for my classes, but rather, I took it to find out what it was all about! Piloxing is a type of workout that incorporates standing pilates, boxing and dance and while I thought it was a good workout, it wasn’t as great as I was expecting. The instructor kind of annoyed me because she literally yelled the entire time… like yelled AT us, which I didn’t take well to. The moves were fairly basic so it was easy to follow along, but I think it was hard to get a great workout if you didn’t have rhythm and didn’t add in extra flare. I’d like to try it again, but I definitely don’t think it’s the type of class I would like teaching- it just wasn’t my style! 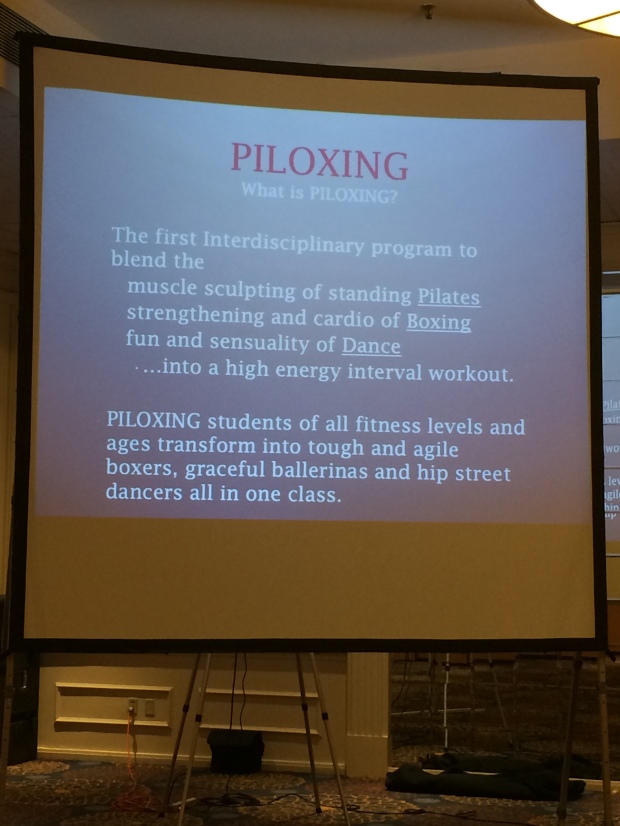 To break up the day, I decided to take a lecture instead of a movement class. This lecture was SO interesting- I think it’s amazing how much our bodies work in a connected manner. You’d never know something about the way you stand could affect the rest of your body so much. I will say, though, that I thought we were going to be learning more about how to lift and ways we should be lifting and while we didn’t get into that specific type of detail that I wanted, I still learned so much about movement and lifting in general. Here are some things I learned:

The instructor for this course (Fabio Comana) was SO knowledgeable. I learned better squat and lunge techniques and have really started to bring those slight changes into my classes. I wanted this class to be longer because I still had so many questions! I wanted him to watch me do various exercises so he could critique my format. Such a valuable course!

All in all, MANIA, although I only attended 1 day, was awesome. I left there feeling so inspired to be a better instructor and to expand my class base. Unfortunately, I can’t add any more classes to my schedule, but man do I wish I could!

If you’re a fitness professional, or just someone who loves learning about fitness and trying new things, I highly suggest MANIA- it’s awesome!

Questions for you: Have you ever been to MANIA? Do you like Kettlebell training? What do you think about the differences and males and females and what we are both capable of?