Well, it’s official: I have the best friends, family and boyfriend around! Everyone made my entire birthday week SO special- I wish there was a better way to show my gratitude, but hopefully this post will help.

As I mentioned last week, my birthday celebrations started the weekend before my birthday with the Wine Fest. From there, my birthday was an amazing day from start to finish! Finally getting a chance to check out SoulCycle was such a fun thing, and doing it beside my sister and Jess was even better 🙂

After our workout, we walked over to Seasons 52 for lunch. Have you guys ever been there or heard of it? I’m not one for big box chain restaurants, but since this one was so close and since I had heard such great things about it, we decided to check it out. I’m so glad we did because it was awesome! Everything was so light and fresh. We talked to the waitress and although everything on the menu is currently under 475 calories, they are shifting towards  removing the calorie count since they are starting to incorporate more super foods that generally have higher calorie counts. Think: avocados, nuts, etc. I think this is awesome because it’s true- just basing your meal on calories isn’t going to be the healthiest option (but that’s another post for another time!). Anyway- I got the fish tacos (surprise, surprise) and a glass of rose and my sister got a flatbread which came with a wine flight AND a glass of wine for $15- amazing deal.

Later in the evening, I got dressed up and met RM in the city and we grabbed a drink at Rumba (the bar in the Intercontinental) before heading to dinner. 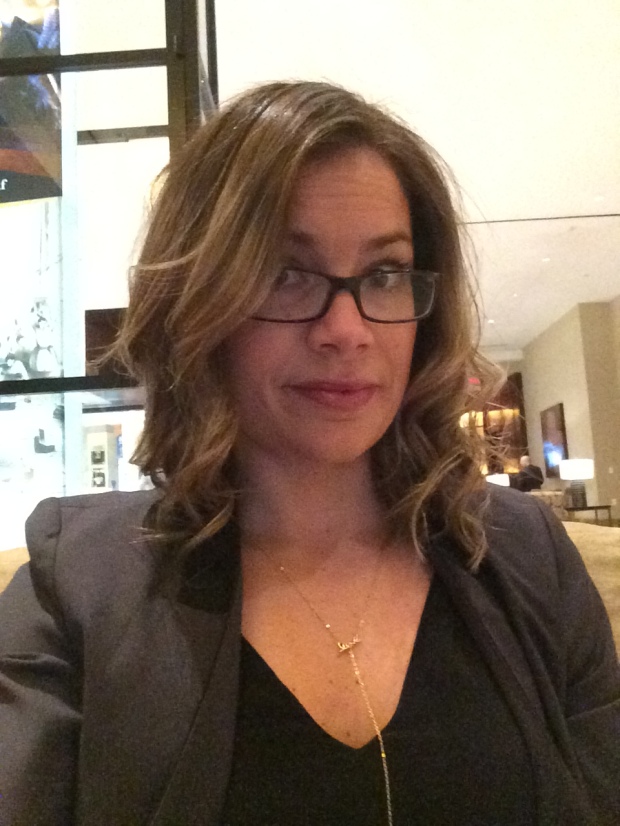 He took me to Cinquecento, which is an Italian restaurant in the South End. We were supposed to go there for Valentine’s Day, but due to the weather, we ended up staying local, so it was a nice surprise that he chose that restaurant for my birthday. I sipped on the most delicious glass of bubbly rose and then enjoyed my Tagliatelle alla Bolognese. RM got his favorite dish, the Branzino con Scarola Brasata e Funghi, which was also delicious. I was SO impressed with both dishes- I’m suddenly hungry as I start thinking back to the meal! 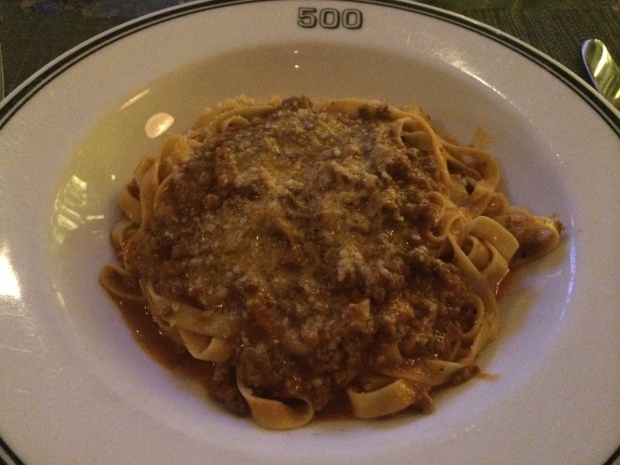 Lastly, RM surprised me with a molten chocolate lava cake and ice cream which was to die for!

And… now for the party recap! I told RM that I didn’t care about a surprise party, I just didn’t want to be the one to plan it. With that said, he reached out to my sister and my friends in various groups in my life and planned one hell of a party. I had no idea where we were going or who would be there or what to expect, so I did what any other 30 year old would do: wear pleather pants, new heels and my reddest lipstick 😉 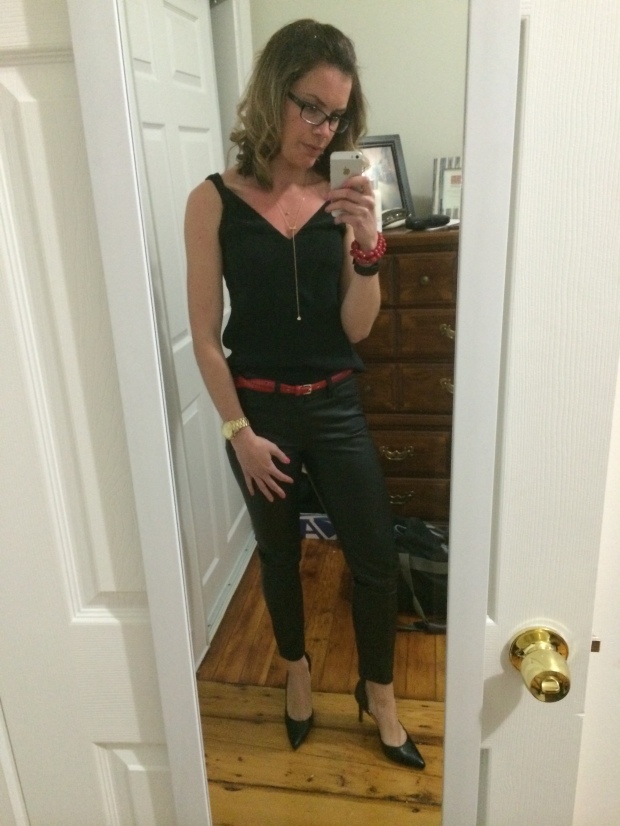 I literally had no idea where we were going until our cab pulled up out front. The location? Carrie Nation! I hadn’t been there since Christy and Jamie’s Wedding, so I was excited that he chose it. I was blown away by how many people were there- and so many that I was completely surprised by seeing! The food, the cake, the drinks, the company- everything was just perfect. I highly suggest checking out Carrie Nation if you’re looking for an event space. I’ll let the pictures do the rest of the talking… 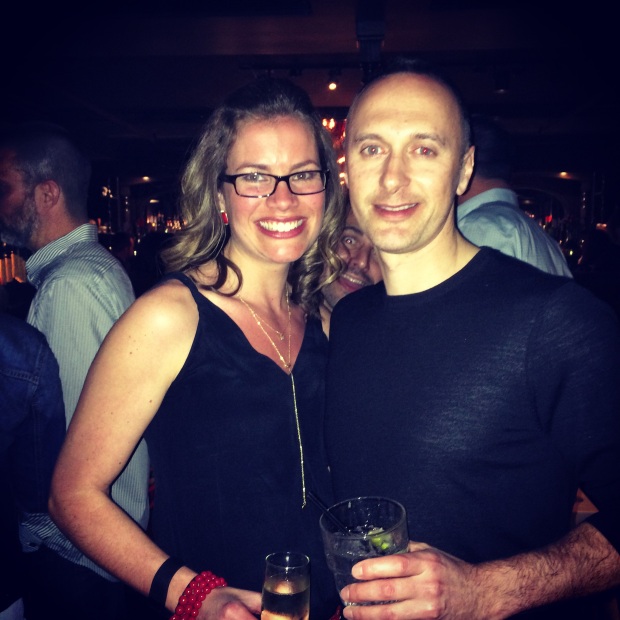 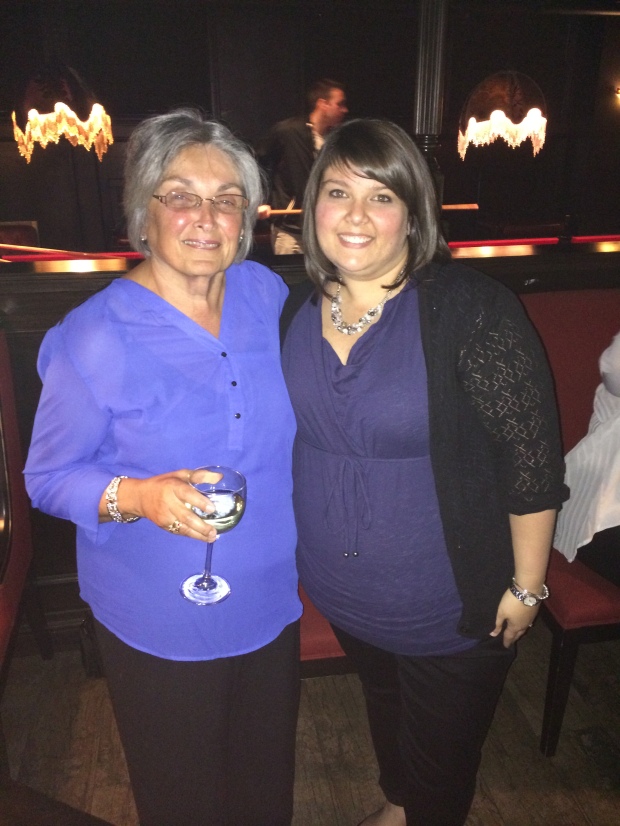 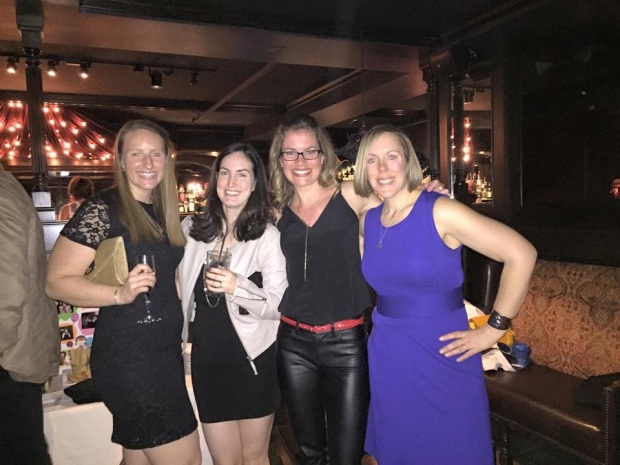 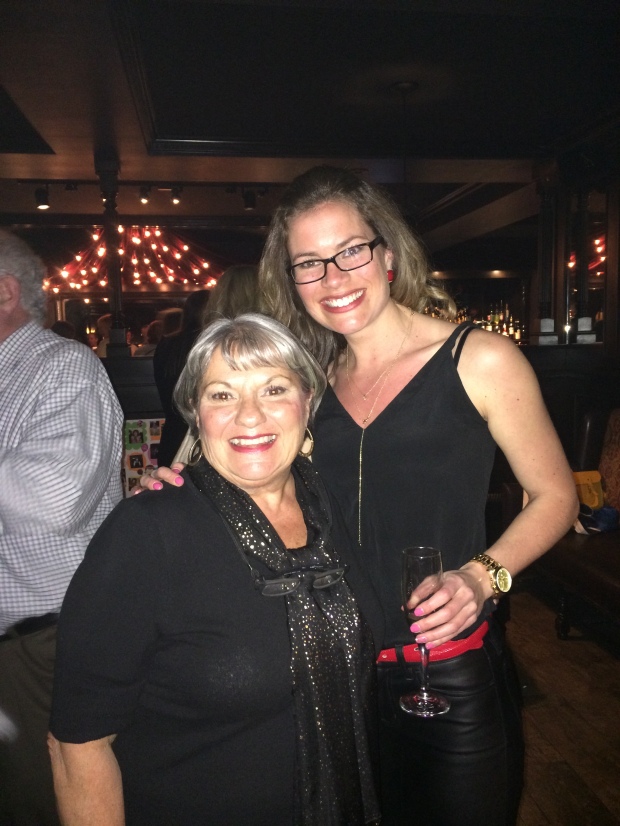 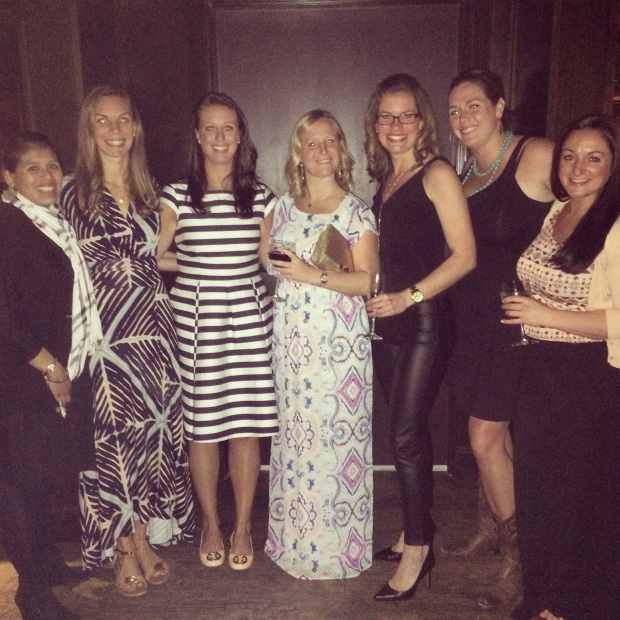 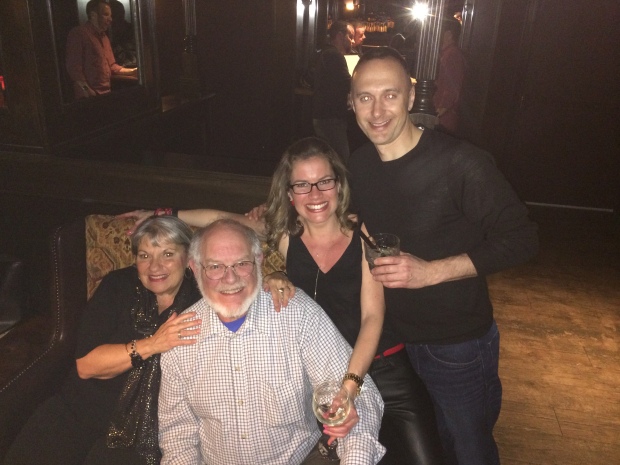 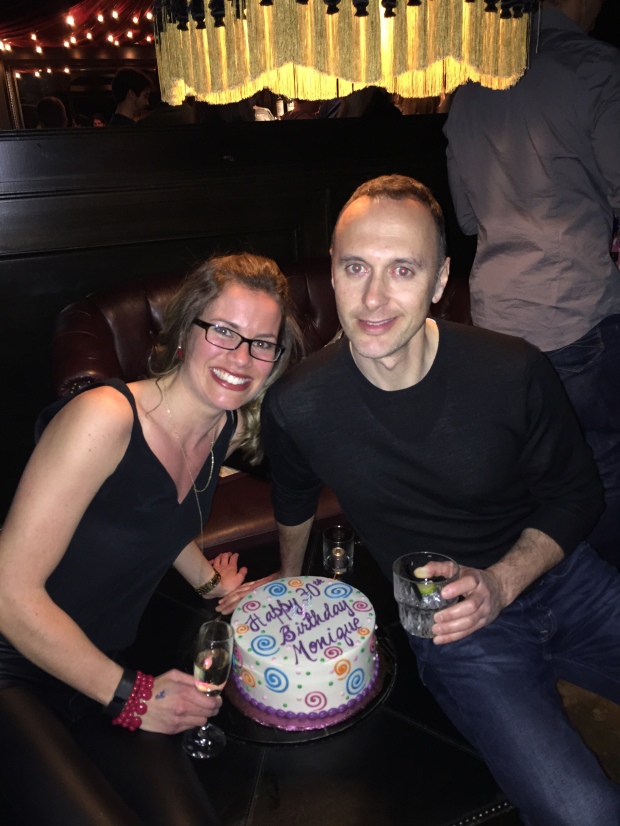 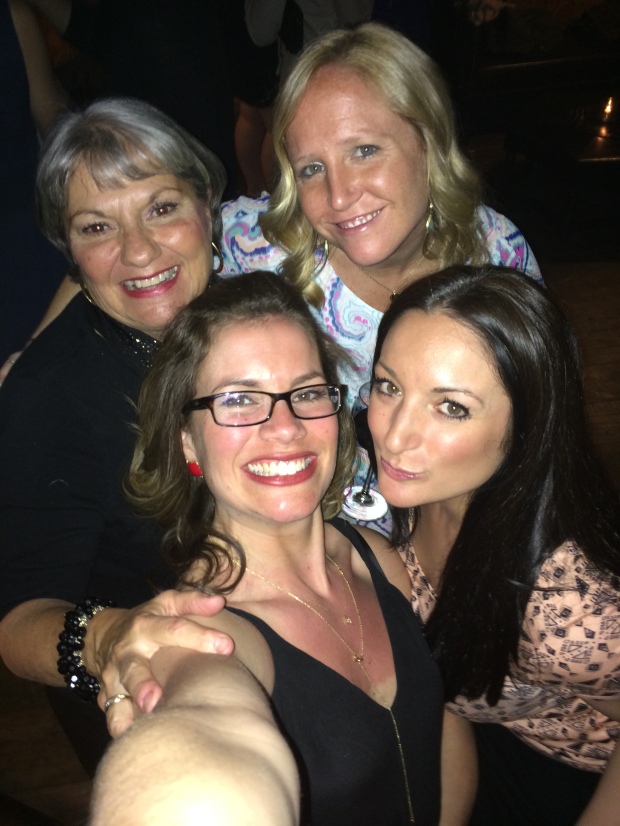 It’s funny because my dad told me the next day that he’s never seen me smile so big and so much and looking back at these pictures, he was right. I don’t think I’VE ever seen myself smile so big 🙂 But I was just SO happy and SO thankful for the night. The fact that Roberto, with the help of my sister and friends, planned and executed such a great party was just so awesome. No one has ever done that for me! My sister is also to thank for all of her behind the scenes work- so thank you for that, Dan! And to my mom, thank you for this picture collage of me throughout the years. While some pictures are ones I wouldn’t mind never seeing again, they were the perfect addition to the collage.

And to everyone else (Ashley- I can’t wait to use my Athleta gift card!! Jen- booked my next Stitch Fix!, Jean and Jeanne- the Marshall’s gift cards will come in so handy for my Italy shopping, Brad and Amanda- the SoulCycle gift card is amazing! Kia- I’m already using my new water bottle and headbands)- thank you for coming and celebrating with me… I feel so blessed to have so many wonderful people in my life. You’re the best! xoxo

Lastly, my mom also gave me this beautiful diamond necklace, which is really sentimental because the diamond came from a set of diamond earrings she had. She lost one and thought to put the other one in a new setting and on a string. I love, love, love it. 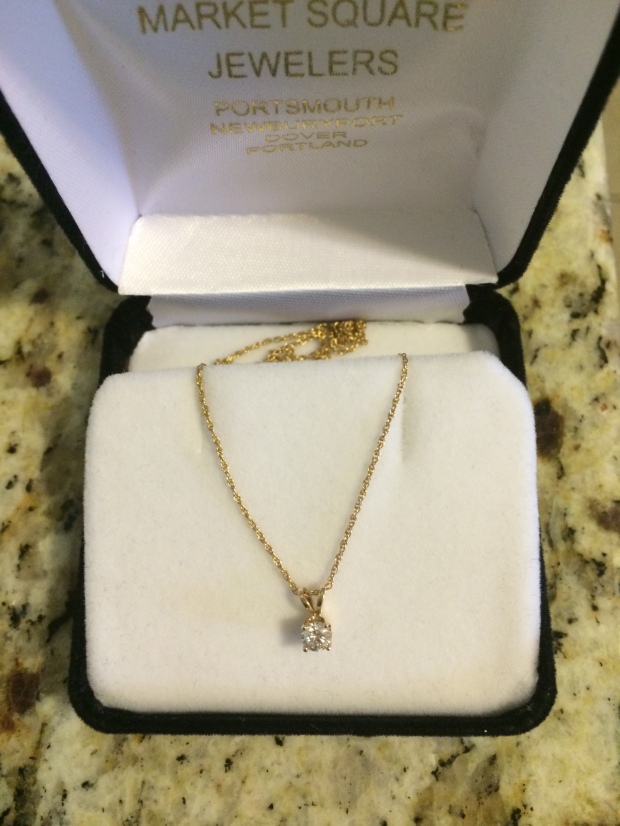 Thank you if you made it this far in the post 😉 I just had a lot to say because I’m just overwhelmed with happiness from such a wonderful week of birthday FUN. 🙂

Questions for you: Has anyone ever thrown you a surprise party or a party? Are you a planner? have you been to Carrie Nation? What’s an article of fun clothing you’ve bought and worn?

12 thoughts on “My 30th Birthday Celebrations”