It’s no lie that I love stuffed peppers. They’re easy, they cover lots of ground in the veggie department and there’s really no right or wrong way to make them. The possibilities are endless! I made them a few weeks ago- no recipe… just threw stuff together- and realized that while I like the IDEA and the LOOKS of stuffed peppers, all I really care about is the stuffing… that’s where the good stuff is!

The stuffing is great because it’s so easy to eat- no cutting required, which I quickly realized is clutch when eating out of a Tupperware container at my desk during lunch 😉 Since there is always leftover stuffing when I make stuffed peppers, I figured out that topping some cooked kale or a spinach salad with the stuffed pepper “stuffing” was not only a great way to not let anything go to waste, but also something I enjoyed more, which is where today’s recipe comes from.

Last weekend, I made deconstructed stuffed peppers, otherwise known as a stuffed pepper casserole, and I have to say, I like it much better than standard stuffed peppers! I think you guys will also like how easy this is to whip up and enjoy throughout the week.

1. Pre-heat oven to 350*. Heat a medium skillet on medium heat with plenty of EVOO. Chop your veggies and add the onion and garlic and let simmer for 3-5 minutes. Then add in the red and green peppers and finally the broccoli. Meanwhile, steam the corn and cut the kernels off once it’s cooled.

2. Once the veggies are all cooked, place them in a big mixing bowl and start cooking your ground turkey. When the turkey is nearly all browned, add in the spinach and cook until it’s wilted.

3. Add the turkey & spinach to the veggies and then add in the sauce. Mix well and then place in a casserole dish, top with shredded cheese and bake for about 20 minutes. Once everything appears to be bubbling, broil for a few minutes to get the nice brown look on the top.

I ended up cooking some Jasmin rice to bring with my stuffing for lunches at work, but you could do quinoa, millet or nothing if you’d prefer. The beauty of these, like I said, is that there’s no right or wrong way to make them- usually I use whatever is in the fridge or on sale at the store. 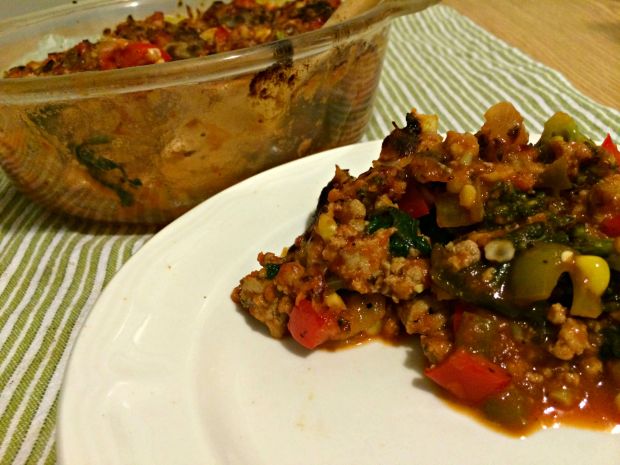 In this one-dish meal, you’re getting veggies, protein and healthy fats- can’t really go wrong with that! AND it’s a quick meal to throw together during the crazy busy summer. I’d love to know if you try it! 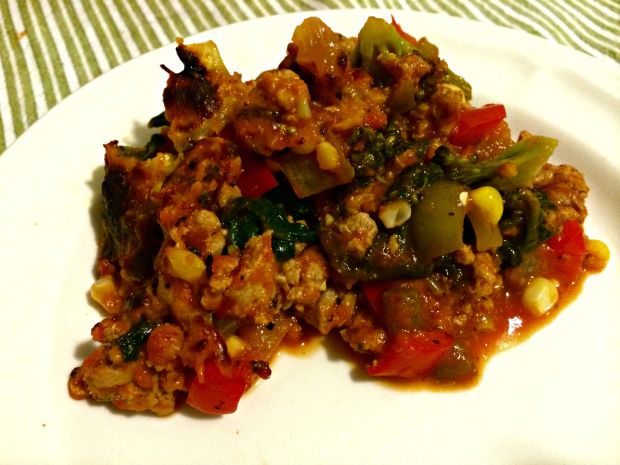 Here are other stuffed pepper recipes I’ve shared before:

Questions for you: What’s your favorite kind of stuffed pepper? What staples do you usually use? Have you ever made deconstructed stuffed peppers? What do you do with the extra stuffing?

Leave a Reply to Burpees to Bubbly Cancel reply