Good morning! I’ve been meaning to get you this recipe, but for one reason or another it just wasn’t able to happen until today. I promise you, though, it’s worth the wait!

Quesadilla’s aren’t a common occurrence around our house, not because they’re not delicious, more because we just never think to make them. Tacos, though? You bet we keep those on a frequent rotation- I love, love, love all types of tacos and we’ve mastered a few “recipes”  (fish tacos, steak tacos). After our most recent bout of quesadilla’s, I know these will become a staple, too! 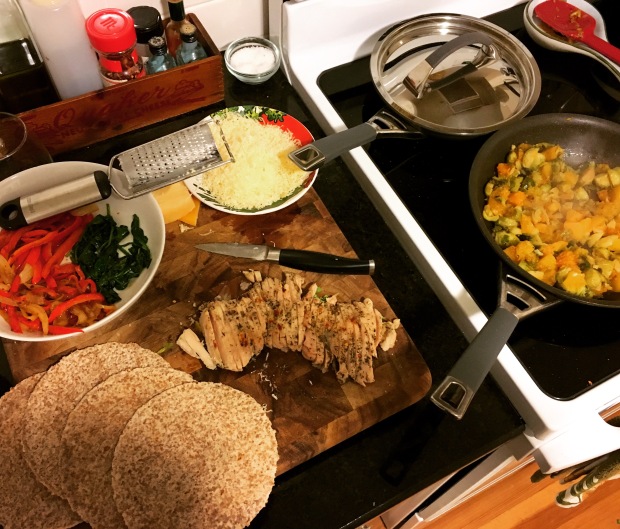 For these, I decided I wanted to get creative and offer 2 types: standard peppers, onion, spinach & chicken and then another that was a little less traditional, but perfect for this season: butternut squash, brussels sprouts & goat cheese. Both came out really great and it was hard to choose our favorite since they had such different flavors from one another.

On top of the veggies, we opted to use the mini Ezekiel wraps we had in our freezer, which ended up working out great because they didn’t get soft and soggy like traditional flour tortilla’s tend to get when you fill them with cheese and sauteed veggies. I also got all fancy and bought some nice, sharp cheeses and shred my own cheese rather than buying a bag of shredded cheese… not necessary, but it was a nice touch!

The only downside of these is that it took a little bit of time to prepare the veggies initially, but the good thing is that if you make a big batch of everything, it’s so easy to whip up more quesadilla’s the next day! Oh, and my hands got REALLY messy as I was assembling the ‘dilla’s… totally worth it, though! 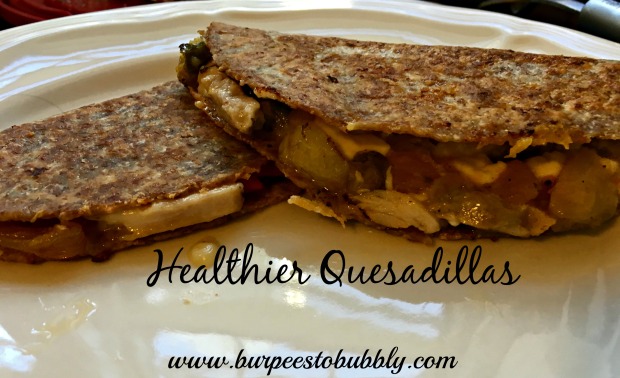 1. Cut up your veggies & heat a medium skillet over medium heat. Add in the EVOO and sautee your onions & peppers first. To help speed up the cook time of the Brussels sprouts and butternut squash I steamed them before sauteeing them. Once they softened up, I added them to the skillet for a bit (after I had removed the peppers & onions). When the Brussels sprouts & butternut squash are done cooking, throw a handful of spinach into the skillet; remove once it’s wilted. 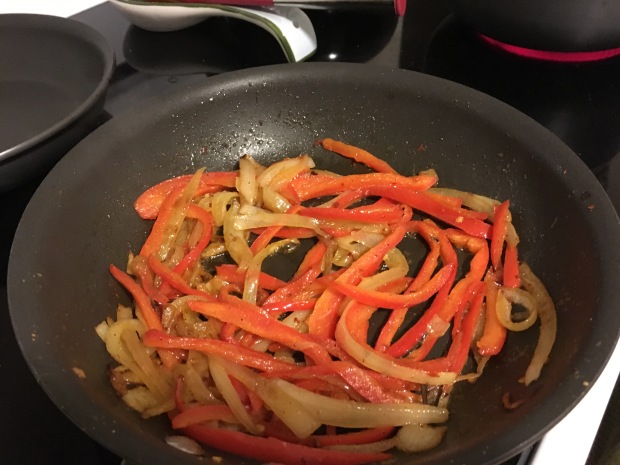 2. Once the veggies are cooked, remove them from the pan and place into separate bowls. Add the chicken to the skillet and cook for 3-5 minutes on each side, or until they are cooked all the way through. We like to sprinkle salt, pepper & garlic powder on each side while they cook.

3. While the chicken is cooking, shred your cheese 7 set aside.

4. Once the chicken is done cooking, turn the heat down on the stove a bit and place one wrap/tortilla on the greased skillet you’ve been using (why waste more dishes?!). Add a thin layer of cheese, your chicken & veggies (changes based on what option you’re making) and the put a final layer of cheese on top before you cover it with the other tortilla/wrap. Let it cook for a few minutes- at least- on each side so that the inside is nice and melty and the outside is a little crispy.

5. Once they’re cooked, slice & serve with a side of homemade (or store bought) salsa.

These were such a fun Friday night meal and I love that there are endless options for the different types of quesadillas you could make. We loved these so much we ate them for lunch the next day, too!

Questions for you: Do you like quesadillas or tacos better? What’s your favorite quesadilla or taco filling?

5 thoughts on “A Healthier Quesadilla”