Good morning! I know everyone is talking about the weather, but I mean, common- is it really this warm in FEBRUARY?! I’ll take it, though. If there isn’t going to be snow I don’t really want frigid cold temps.

Did you guys have a good weekend? Although I was feeling a little anxious going into it because of how many plans we had, it ended up being such a great one! My sister and I decided to “play hookie” on Friday afternoon so we met up at Assembly to go shopping. RM and I were having our engagement photos on Saturday afternoon and I hadn’t been able to go shopping prior to, so it was nice to have some extra time on Friday to shop without being rushed. It was also nice to get to hang out and catch up with my sister- lunch, shopping and drinks on a Friday afternoon- can you get much better than that? 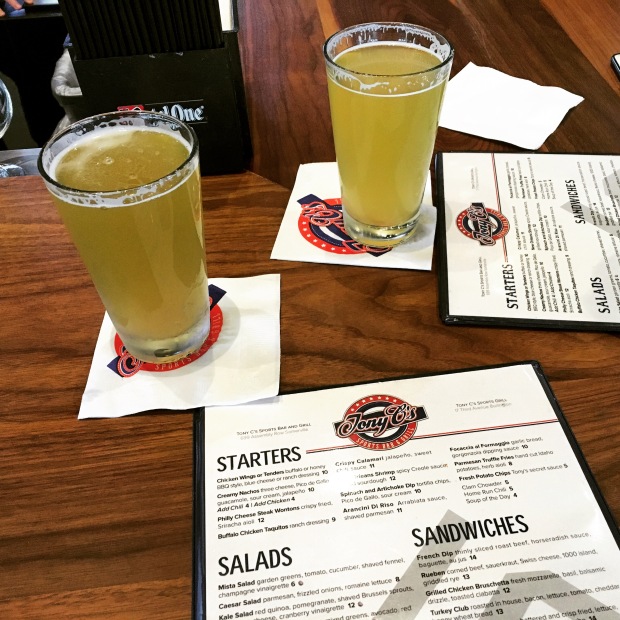 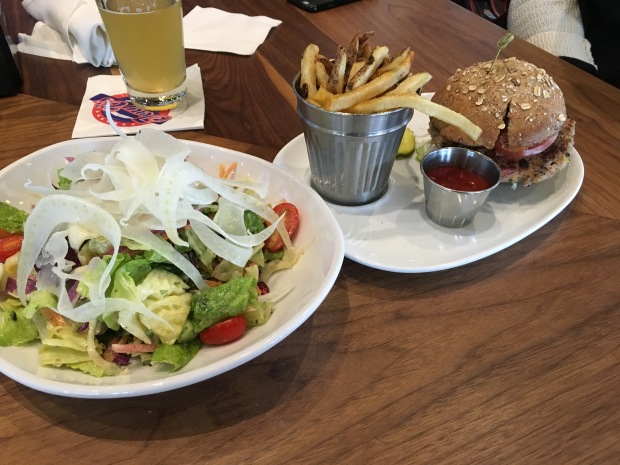 I was on a mission for just a few necessary things for our photoshoot: white jacket, new jeans and new black booties, all of which were found- and most on crazy sale! My friend suggested going to Wilson’s Leather for jackets and I’m so happy she did because I got both of these for $84! I don’t think I would’ve gone in there on my own… I mean, I didn’t even think this store still existed! 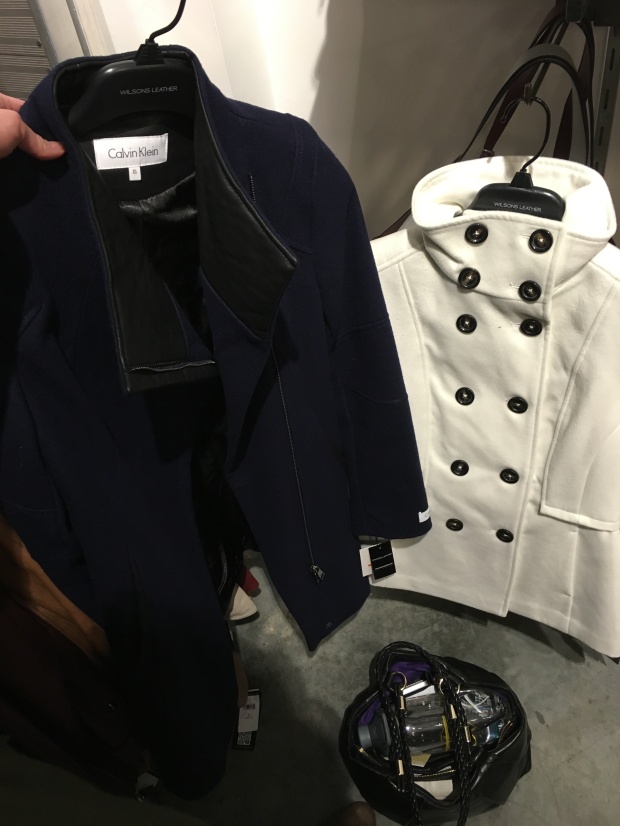 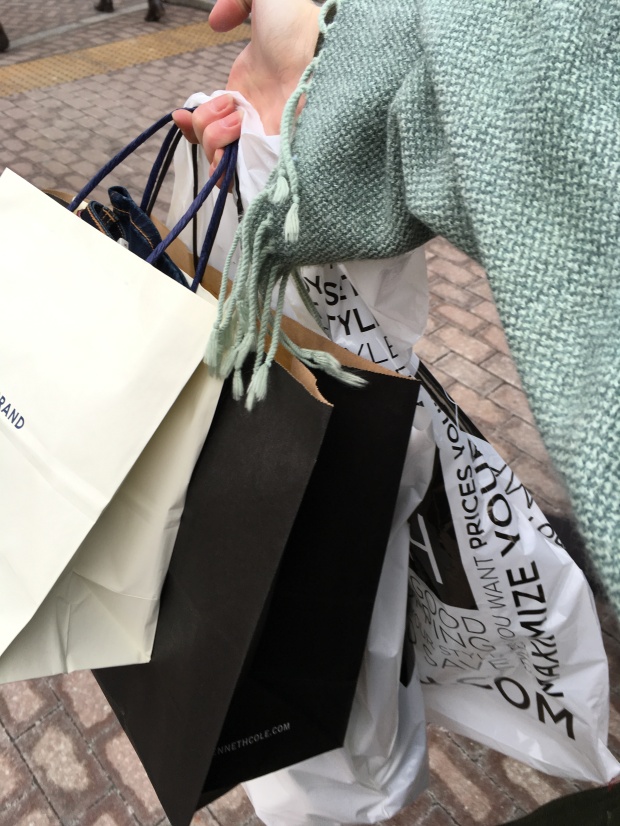 After our shopping I went to my friend Jessi’s apartment for some vino, apps and girl talk before making my way back to Newton Corner. I didn’t want to leave, but I knew I wanted/needed to be rested for Saturday. I grabbed a pizza from Bertucci’s on the way home, we watched an episode of Breaking Bad and hit the hay by 10:30. It was fantastic.

Saturday started with an incredible cardio kickboxing class- 60 members came and gave it their all. It makes what I do so rewarding!

After class I cleaned up quickly and went to Queen Bee Nails to get a much-needed manicure followed by heading to Waltham to get a hair cut and blow out. I always try to plan my hair cuts around when I have something going on at night because it makes my “getting ready” time much easier and faster! 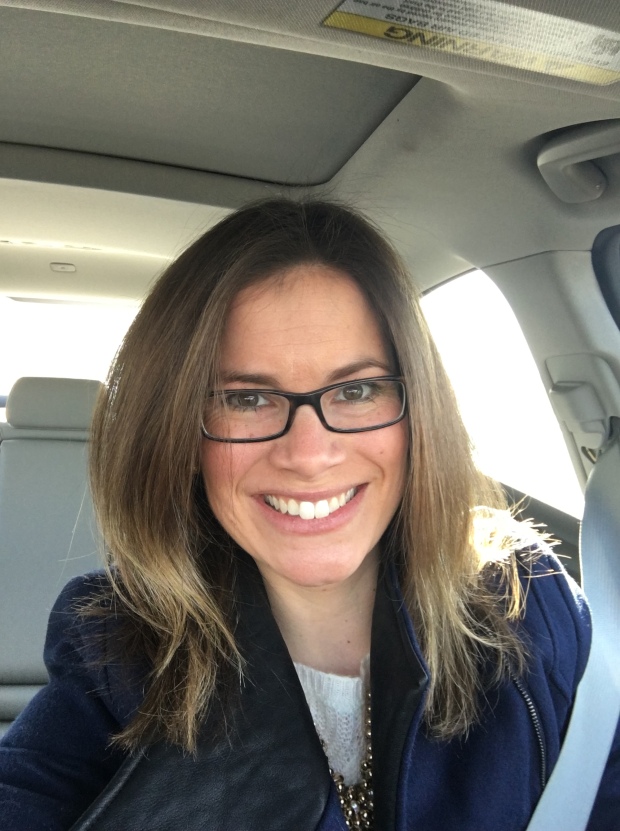 I ended up wearing this for the photos: 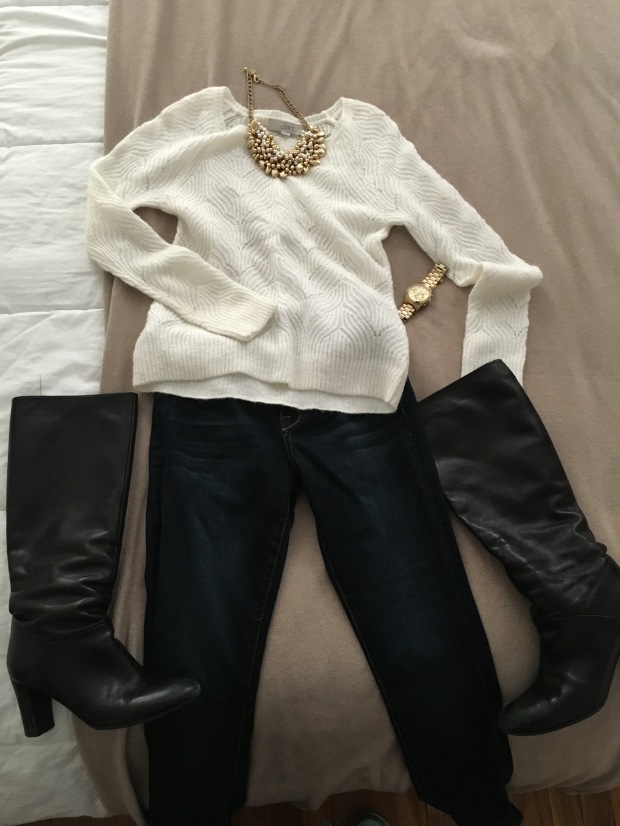 Later that afternoon, we headed over to East Boston to meet up with Janelle at KO Pies since it seemed only fitting to kick off our engagement photos where it all started! Janelle and I worked together a few months back when she did my fitness photos, so I’m so excited to be working with her again! The owner of KO Pies was so happy that we were doing our photos there that he asked if he could take a picture and share it with our story- the photo isn’t great, but it was so cute of him to be so excited for us! 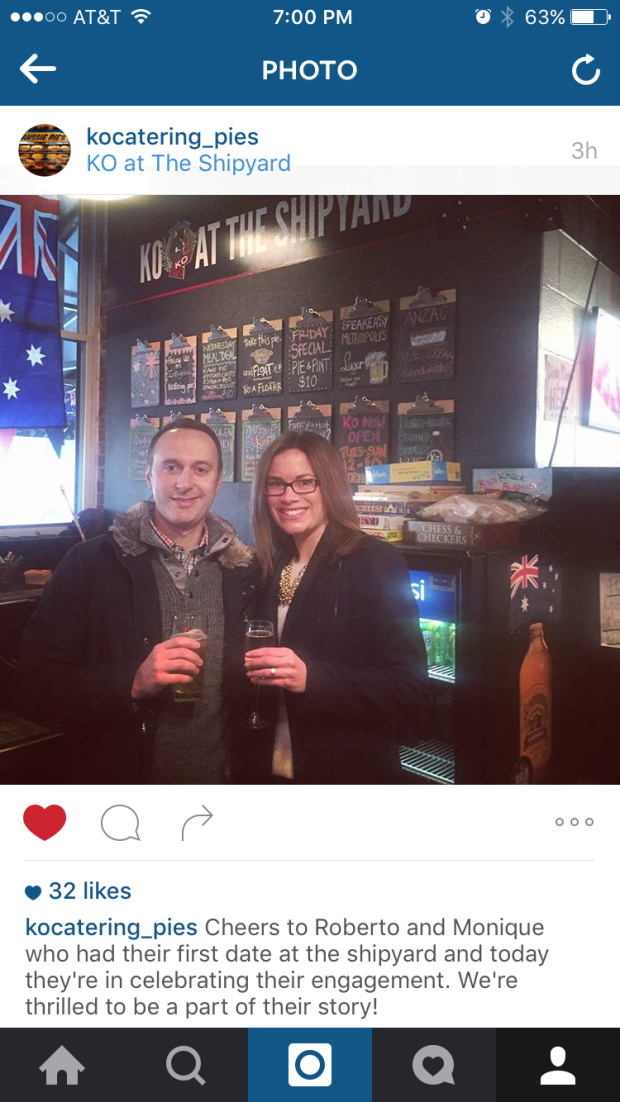 Janelle’s photos, though? She shared a sneak peek and I love it so much. I can’t wait to see the rest!! 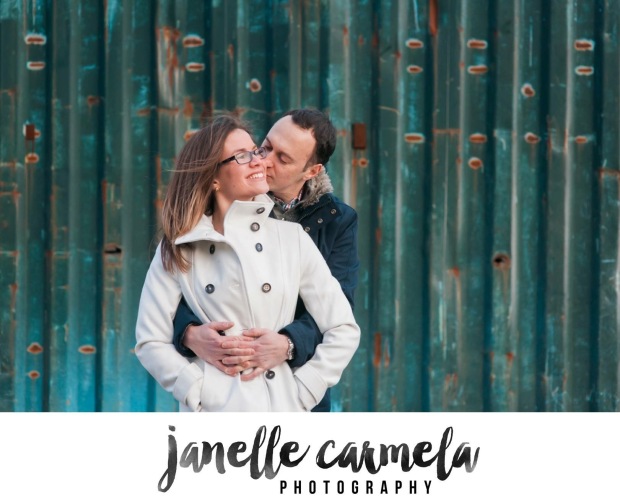 After the photos, RM and I headed back home quickly before parting our separate ways for the night. I was going into the city for my friend Sheila’s surprise party at Stoddards and he was going to meet up with some guys on Moody Street in Waltham. Even though I was exhausted and so tempted to stay home, I’m glad I went because nights out in the city with these ladies just don’t happen as much these days! 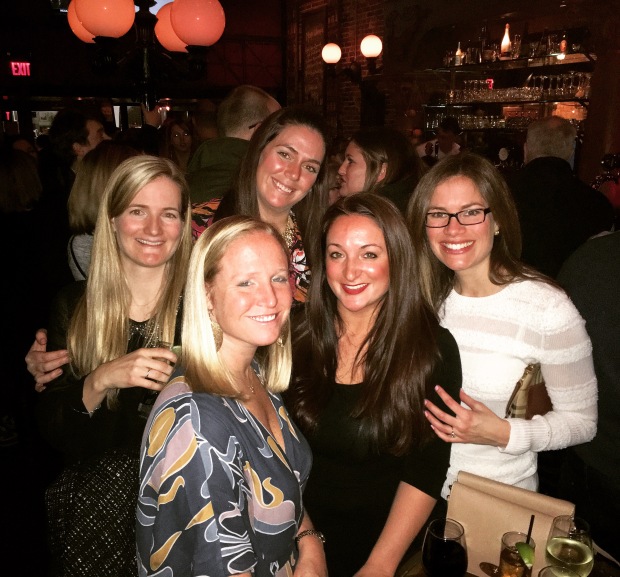 We ran out of eggs on Saturday so we decided to go out to breakfast on Sunday, something we rarely (if ever) do! We went to the Delux Town Diner and it was fantastic. Veggie Hash & eggs for him, breakfast sando for me and their unbelievable sweet potato pancakes to share. I forgot how good diner breakfasts are!! 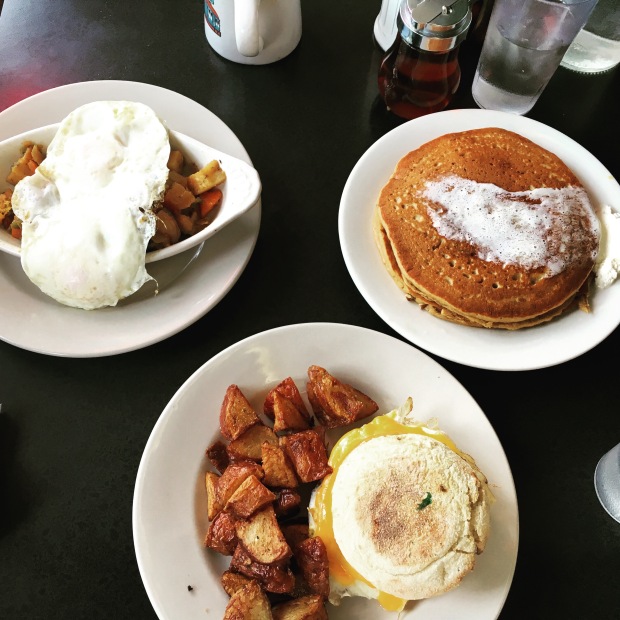 After breakfast and food shopping, we went into the city so RM could take some photos for his new website. I wanted to go for a walk anyway so this was a great way to do both things. The weather was just too nice to be inside! 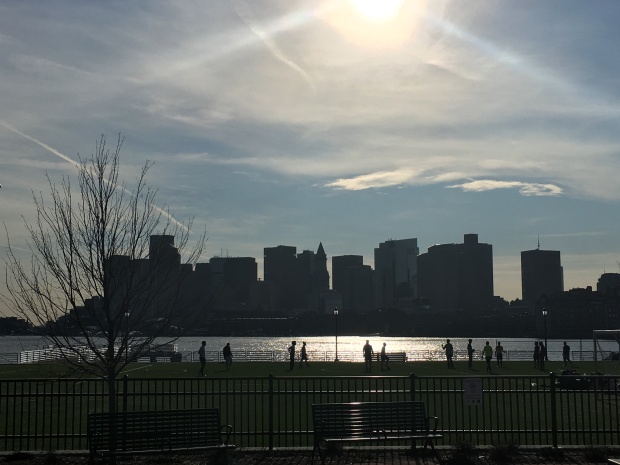 We swung by his mother’s for dinner after and then when we got home I did some food prep, including this incredible looking spaghetti squash which has sautéed onions, garlic, red pepper, zucchini, summer squash, spinach and ground pork. Topped with a little cheese and you’ve got your self a super tasty and healthy meal! 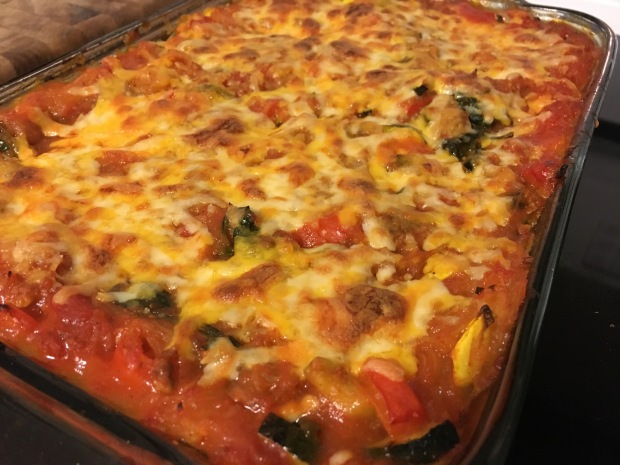 I’m gearing up for a busy week between subbing for Lauren’s Build & Burn classes tomorrow night (if you’re a YMCA member, come!), teaching my class on Wednesday and then teaching the kickoff sweat-KICK class at Foster Fitness on Thursday, so I’m happy to have a dish that will be quick and easy to re-heat for dinners!

Questions for you: How was your weekend? Have you ever played hookie? Did you get any good workouts in? Did you try any new recipes or restaurants? What’s going on this week?