Hey friends! I don’t know about you, but hot, summer weather just screams BBQ to me. Since I have yet to buy a grill, I thought of other ways I could achieve the feel of a summer BBQ meal. Enter: pulled chicken. After 7 summers working at Shaw’s Ridge Farm with some of my favorite people (Meredith, included!), I’ve developed a very soft spot in my heart for all things BBQ: pulled chicken, pulled pork, ribs, baked beans, coleslaw… you get the idea. On Sunday, since the weather was so hot, I decided to put my Shaw’s Ridge BBQ Barn skills to use and make myself a Southern Meal!

I found this recipe over at Eat Live Run and have made it a bunch of times. Every time, without fail, we all rave about about how GOOD it is. And, my favorite part about this recipe is that it is really easy. Although it is technically a crock pot meal, every time I’ve made it I do it on the stove and let it simmer for an hour or so and I think it’s probably just as good!

I copied Jenna’s recipe exactly, except I added 1/2 cup minced onions and I did not cook it in a crock pot.

1. Chop onions and cook until they are clear. Add in the remainder of the ingredients (ketchup through garlic salt) and bring to a boil. Reduce heat and let the sauce simmer for an hour or two, depending on how much time you have!

2. While your sauce is simmering, cook your chicken. Normally, I would boil it or bake it, but the pot was dirty and it was REALLY hot, so I cooked it in a pan. When it was cooked through I removed it from the pan, let it cool and then shredded it.

3. When the sauce had thickened and reduced, I added in the shredded chicken and stirred to combine everything. 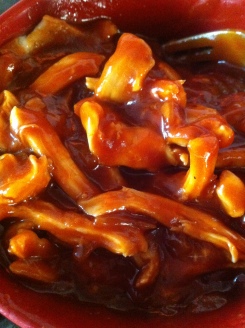 I served my BBQ pulled chicken with baked beans, rice and corn on the cob; the only thing missing was coleslaw. Next time!

This meal totally hit the spot for a hot, summer night and I am already looking forward to leftovers! I bought some wraps so I may make a BBQ pulled chicken quesadilla or wrap later in the week.

Questions for you: Do you prefer pulled chicken or pulled pork? Do you make your own BBQ sauce or buy it?