Monday is over- woohoo! I hope everyone was able to get out and enjoy the weather this past weekend because it was beautiful! Still a little warmer than I would like (I am ready for fall!), but I really shouldn’t complain since it’s nice to have great weather.

By the time Friday rolled around, I was so bored! I didn’t have any plans after work or teaching last week and worked from home on Friday, so by that point, I was really ready to get out of the house and hang out with people! My sister was flying out the next morning, so I headed to Somerville and we grabbed dinner and drinks at Orleans in Davis Square. We shared the Brie, Mushroom, Caramalized Onions and Spinach burger which, unfortunately, sounded better than it tasted. We had been going back and forth between nachos and that, and totally should’ve gotten the nachos! 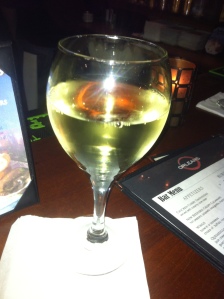 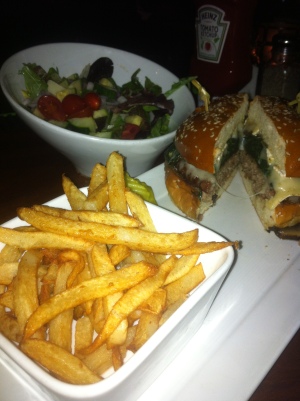 Saturday, I got up and taught kickboxing (seriously my favorite way to start a Saturday. Nothing like getting a crazy sweaty cardio class first thing!) and then went to Market Basket to do my small weekly grocery shopping. Boy was that a mistake! It was a million times busier on Saturday than it is on Sundays. Yuck.

My college girlfriends and I had tentatively planned to go apple picking on Saturday and when I sent a text to see if anyone was still interested in going, I had three takers! We were going to go to a place in Stow, MA, but Jessi needed to get something at her parent’s house in Hampton, NH, so Lauren, Jess, Jessi and I ended up going to Apple Crest in Hampton Falls.

Thanks for the photo, Lauren!

I think it’s safe to say that you can’t go apple picking without getting a cider donut, right?! I don’t even like donuts (I know, crazy. I’m a sucker for muffins.), but this thing was absolutely delicious!! Paired with a hot apple cider? Perfect afternoon snack!

After we finished our treats, we hopped on the hay ride that took us to the area of the farm where picking was happening.

So fun! We spent a bit picking and chatting and laughing. 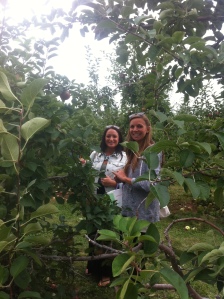 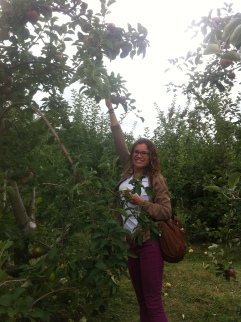 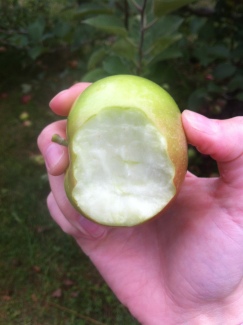 Before picking, though, we got a whole speech about how to pick an apple, with the emphasis on “twisting and pulling” the apple from the tree, not just yanking it off. Thank goodness the apple police wasn’t around when this happened 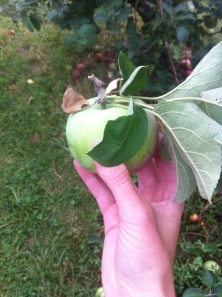 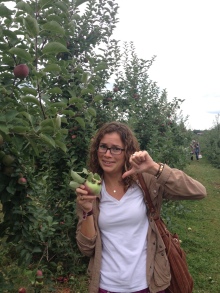 We all died laughing!

What a fun afternoon! So glad we were able to coordinate schedules 🙂 After we finished picking, we headed to Jessi’s parent’s house and had a glass of wine with her dad before heading back to Boston. Lauren and I had planned to go bowling with Jessi and her boyfriend, but by the time we got back and ate, both Lauren and I lost steam and ended up not going out. Whoops. Sorry Jessi!

Waking up Sunday morning feeling great was well worth being lame and not going out on Saturday night! I made some Chocolate Chip Pumpkin Bread, cleaned, went to Wal Mart, went for a run, did laundry, cooked dinner. All around, a very productive day! I hope to have a few recipes for you later this week!

Questions for you: Where is your favorite apple orchard? What did you do to enjoy the weather this weekend?

4 thoughts on “Apple Picking and Enjoying the Weather”