Good morning! I had a busy, but fun weekend this past weekend, anyone else? I feel like I’ve been in constant “go-go-go” mode for a few weeks now and I’ll be honest, I am ready for a little down time! This weekend, besides the Color Me Rad race on Saturday is pretty much wide open. It’s going to feel great to have TIME to get things done, or, to do absolutely nothing but hang out and relax! As I will be moving in a few weeks, I am sure there are lots of things for me to do around here!

On Friday, I dropped Tim off at the airport around 2:45. From there, since it was so hot, I headed to Starbucks to get some work done. It wasn’t at all what I wanted to do, but I didn’t have a choice:( Once I got to my apartment, I pretty much stayed in my air-conditioned bedroom since our apartment thermostat read 93 degrees. Yikes!

Saturday morning, I woke up mostly rested and mentally prepared myself to tackle the day! On the agenda, going to the bank, teaching kickboxing, grabbing lunch, babysitting and then stopping by Rachel and Dans’s for a BBQ. As I said yesterday, kickboxing was SWEATY! I think it’s because our body temps are abnormally high because of the crazy heat wave- does this make any sense? I got a kick out of the twitter messages post class: 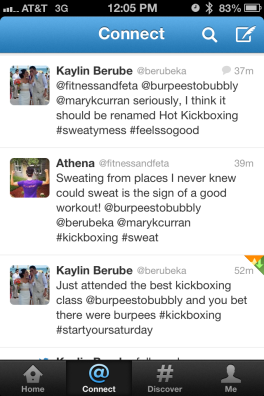 At least I wasn’t the only one:)

Babysitting was hot, but fun. Watching the kids play in the sprinkler was so fun- ah, to be a carefree kid again, just for a day, would be so great. I brought pizza dough and toppings since I thought it would be fun for us to make pizza together, instead of ordering out. The kids LOVED it. Trying to explain the concept of what we were doing and what it would “turn into” after we baked it was hilarious. Lila said it was the “best pizza she has ever eaten”… job well done 🙂

Unfortunately, Rachel and Dan’s BBQ had ended, but it was nice to chat with them for a little while. I was ok with going home early as I knew I needed to get up and leave the house by 8:30am on Sunday to meet Meredith for breakfast in Portsmouth. Meredith moved to Australia about 8 months ago, so it was SO GOOD to finally see her and catch up. We joked, though, that there’s no way to catch up on that many months in an hour and a half breakfast. We did our very best! Meredith is literally the sweetest person I know and I am so happy that we are such good friends. She’s the best listener and just “gets” it (whatever “it” may be). Thanks for meeting up, Mere!! Miss you already!

Since I was already north of Boston and the weather was nice (the heat wave seemed to have finally broke!!), I decided to hit up a beach that I might not normally go to. I had a million things on my “to-do” list, but when I looked at it, I realized that I really needed some quiet “me” time, so I decided to go to Plum Island in Newbury. The beach was really nice and luckily, it wasn’t too hot. I stayed for about 2 hours until I realized I was a. starving and b. nearly out of water. If hangry Monique is awful, hangry and thirsty Monique is a monster! 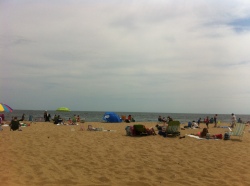 On my way home, I stopped in Danvers at the Stop n Shop to grab a few groceries and lunch and made it back to my apartment early enough to have time to water my garden, blog, do laundry and get ready for dinner.

I went to dinner in Dorchester and was very surprised with how nice the restaurant was! When we walked in, the place looked dead, which generally makes me nervous, but as soon as we walked outside to the patio, we realized why the inside was empty: the back patio was awesome!! I was bummed when the server said they were out of the Miso Glazed Salmon, but when I took a bite of the Ahi Tuna Taco’s, I pretty much forgot about the salmon! I am so happy that the weather has cooled down a bit because outdoor dining in the summer is my favorite! 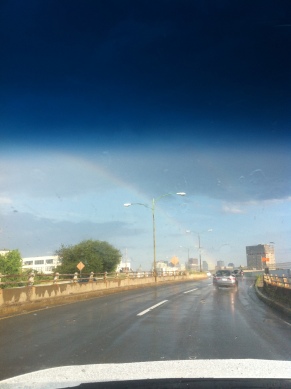 (Pretty rainbow I saw when I was driving!)

All in all, it was a great, but busy weekend!

Questions for you: Do you like to make your own pizza? Favorite restaurant in Portsmouth? Do you feel like you sweat more in classes when it’s hot out even though they are indoors?

I want to wish my very dear friend, Sara, a very happy birthday!!!