As I’ve mentioned, last week I spent the week in Stowe, Vermont for a work conference. Since the conference was in the summer, I really couldn’t have thought of a better place for it to have been held (well, unless it was in Maine- that’s another terrific summer location, maybe even better since it has the ocean!). My coworkers, Tim and Jim, were also attending the conference, which was awesome since we all get along really well. Jim was bringing his wife, so they drove up in one car and I took Tim in my car. Obviously, I made sure to stock us up with delicious (and mostly healthy) snacks for the ride because no one wants a hangry Monique 😉

The ride up 89 was just as I remembered it: long, empty, but absolutely beautiful.  Tim lives in Florida, so he was really amazed by the views. I told him that my favorite time to travel up and down 89 was in October, over Columbus Day weekend when foliage was always at its peak. The good thing about this trip, was that we were getting off at exit 10, for Stowe, versus exit 15, for Saint Michael’s College.

(This was in Vermont at a family wedding last fall. The mountains are gorgeous!)

As we got off the exit, we drove past 3 of my favorite Stowe, VT locations and memories from college: Ben and Jerry’s, Cabot Cheese Factory and Pie in the Sky. I remember my college girlfriends and I making day trips to basically eat our way through Stowe!

A little ways further, we showed up at the Stowe Mountain Lodge. The property was breathtaking: it was like a castle surrounded entirely by mountains.

Shortly after arriving, we were checked in and parted ways. My room, although it was literally a 5-10 minute trek from the lobby, was WELL WORTH the distance because it was absolutely beautiful. Somehow I got upgraded to a junior suite and I made sure to gloat when Tim said he had 2 double beds with very little extra space in the room. Check this thing out! 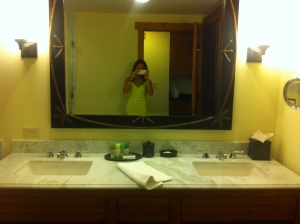 Seriously, the bathroom was bigger than my bedroom here, and the views from the balcony literally made me want to sit out there and just relax and take it all in; that never happens! I was tempted to crank the AC so I could have an excuse to use the fireplace 😉 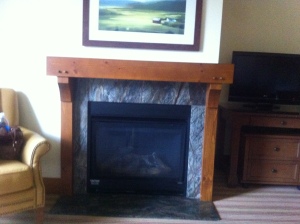 I’ll spare you the conference details, but I will say it was a really worthwhile conference and I made lots of valuable connections!

The nice thing about traveling with Tim, was I knew we would be working out most, if not all, of the days. Tim has been to a few of my classes, but this time I asked HIM to run me through a workout. I’ve mentioned before how I am trying to gain strength, so I was looking forward to workouts that were focused on just a few muscle groups vs a workout with multiple combination moves. On Wednesday, we skipped out on the ice cream social in favor of the gym- talk about serious self control! Anyway, we worked back and biceps first, followed by abs (which Tim let me lead) and then a really awesome trail run around the property. It was one of the better workouts I’ve had in a while- thanks, Tim! 🙂 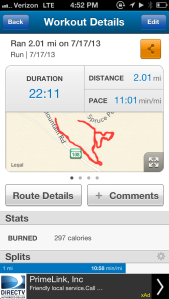 Thanks for taking all these pics, Tim! Some without me even asking! 🙂
Post workout, we met up with other conference goers at the pool, which served as a way to cool off, rinse off, and refuel, right?

Thursday was a bit more wide open, and when I got a text in the middle of the day from Tim that read “any way you can clear your afternoon schedule? Ziplining?”, I got so excited. Ziplining?! How cool! Unfortunately, I had a call smack in the middle of the afternoon that I couldn’t miss and the latest appointment was full. Whomp, whomp. We then talked about doing the obstacle course at the same location where ziplining was held. We ended up nixing that idea since we feared it would be more of a “kids” thing than a “grown up” thing. Next idea? Alpine sledding down the mountain. Sold!… Until they heard thunder as we walked up to buy our tickets and told us we’d have to wait 20 minutes to make sure the storm passed. Whomp, whomp, again. What do you do when all else fails? Go to Ben and Jerry’s, duh! 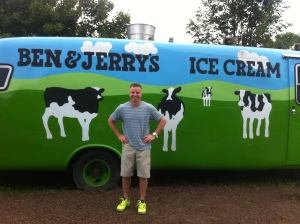 It ended up raining during our drive over, which was basically a sign telling me that an ice cream tour was juuuust the perfect way to fill an afternoon 😉

We ended up doing the “special tour” which meant we paid $20 for a t-shirt AND tour. Loved it! Look how cute my t-shirt is!

There was a bit of a line, so we grabbed kiddie sized ice creams while we waited… and then we had another during the tour… Hey, we were making up for skipping the ice cream social the day before 😉 The salted caramel sampled was absolutely delicious!!! And the tour was more informative than I had remembered. Ben and Jerry seem like pretty cool dudes and I am forever grateful for the “free cone day” they established! 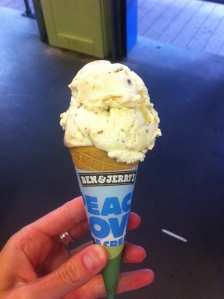 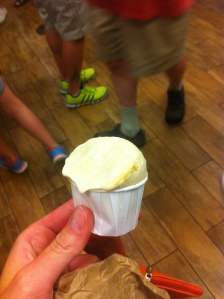 After our ice cream cravings were overly satisfied, we headed back to the lodge. There were a couple of hours to kill before we met up with Jim and his wife for dinner, and I thought I was going to die of boredom (ok, I’m being totally dramatic here, but I hope you get the point!). At first, I thought it was great to have time to hang out on my balcony, read magazines and soak up the view, but about 20 minutes later I found myself pacing around, looking for something to do. I seriously need lessons on how to relax! Even though I struggled with having “nothing” to do, I definitely needed that down time. There’s something about being away from my apartment and being forced to relax that’s actually kind of nice!

Friday morning, Tim and I went to the gym before packing up and hitting the road to head south. I was very, very impressed with the gym at the Stowe Mountain Lodge. Not only was it big, but it was equipped with new cardio and weight equipment, as well as lots of stability balls, BOSU balls, steps, etc. They also offered fitness classes throughout the day. How fun would that be?! I need to find a job like that 😉 We did our own respective workouts; treadmill and this workout for me, and I think Tim did chest and triceps? We joined together at the end for another round of abs. This time, I had him do a full Dynamax Wheel (the only complaint I had about the gym was that they didn’t have Dynamax balls 😦 ) with medicine balls instead of Dynamax balls. 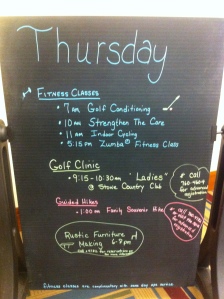 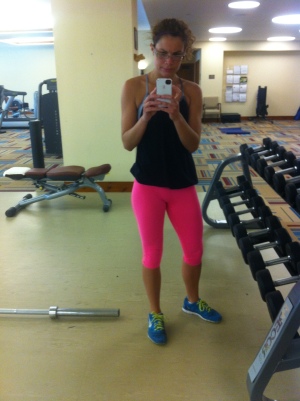 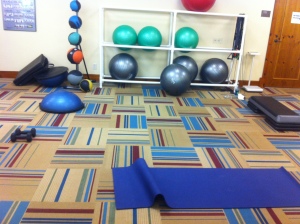 Andddd, that about sums up my Stowe trip! I didn’t take pictures of my meals because I didn’t want to look like that weirdo, well, taking pictures of my meals, haha. It would have been very easy for me to have been persuaded to spend the day by the pool instead of heading back to Boston on Friday, but Tim had a flight to catch and I had lots of work to catch up on, so that wasn’t really an option. All in all, though, the trip was wonderful. I felt very fortunate to have had the opportunity to meet so many people within my industry, as well as have some time to be on “vacation”. If you’re ever in the Stowe area, I HIGHLY suggest checking out the Stowe Mountain Lodge. I cannot say enough good things about it! The staff was incredibly friendly and helpful, and you could tell they weren’t acting that way just because they were getting paid; it was a genuine friendliness, which is so not something you tend to see in Boston!

I hope you enjoyed my recap 🙂

Questions for you: Have you ever been to Stowe? Do you utilize hotel gyms? What’s your favorite ice cream flavor?